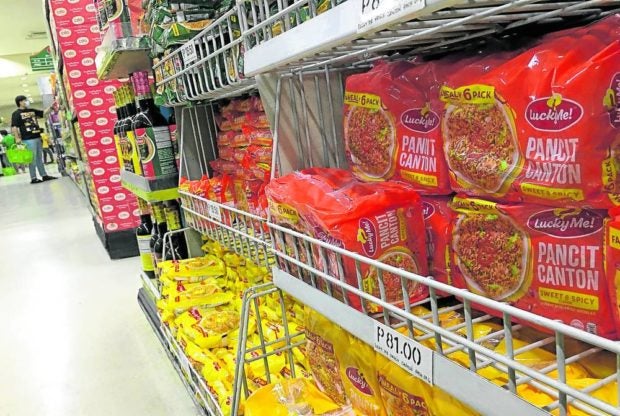 HOUSEHOLD NAME The Food and Drug Administration has started to look into batches and lot numbers of the instant noodle brand to find supposed traces of ethylene oxide, after the product was recalled from store shelves in several European countries. —GRIG C. MONTEGRANDE

The Food and Drug Administration (FDA) has started its investigation of the popular noodle brand Lucky Me! after it was recalled from store shelves in several European countries due to the presence of ethylene oxide, a carcinogenic antimicrobial pesticide.

In an online press conference on Thursday, Health Undersecretary Maria Rosario Vergeire said the FDA had started to look into batches and lot numbers of the instant noodle brand to find supposed traces of ethylene oxide.

She said the substance could cause headache, vomiting, loose bowel movement, and in extreme cases, breathing difficulty and fatigue.

“Whatever would be affected—specifically the batches and lot numbers for this product—that would be the only ones removed from the market and that would be monitored so it would not be consumed by the public,” Vergeire said in response to questions on whether the product would be pulled from the shelves.

Launched in 1989, Lucky Me! has become a household brand in the Philippines, where it controls 98 percent of the market.

The Lucky Me! manufacturer, food conglomerate Monde Nissin Corp., said they heard about “information being shared” that ethylene oxide was detected in “certain export versions” of its instant noodles, ice cream and other products in a number of European Union (EU) states and Taiwan, triggering the recalls and health safety warnings.

Monde, owned by Filipino and Indonesian billionaires, said the chemical was “commonly used” to combat bacteria and fungus in raw materials such as spices and seeds.

It admitted that when processed into seasonings and sauces, these ingredients “may still show traces of ethylene oxide.”

“Rest assured that all Lucky Me! products are Philippine FDA registered and comply with local food safety standards and even the US FDA standards for ethylene oxide,” the company said.

Vergeire said that the results of the FDA investigation were expected in the “coming days.”

The FDA’s counterparts in Ireland, Malta and France issued separate recall notices for Lucky Me! noodles, a pantry staple in Filipino households and a common item in food donations.

In a July 6 advisory, the Food Safety Authority of Ireland said a batch of the Lucky Me! original flavor that was produced in Thailand was recalled “due to the presence of unauthorized pesticide ethylene oxide.” It said the chemical is not allowed for use in food in the EU.

“Although the consumption of the contaminated product does not pose an acute risk to health, there may be health issues if there is continued consumption of ethylene oxide over a long period of time. Therefore, exposure to this substance needs to be minimized,” it said.

Those in Malta that were found to be contaminated were produced in 2021 in the months of February, March, April, July, August and September.

According to the US Environmental Protection Agency (EPA), ethylene oxide is a pesticide used to sterilize medical devices as well as “reduce bacterial levels in herbs and spices.” Its November 2020 draft risk assessment found that years of exposure to this substance could cause cancer and neurological problems, such as memory loss and impaired hand and eye coordination.

A packaging of the Lucky Me! original variant showed that “spice” was included as an ingredient for the noodle’s seasoning, along with garlic powder, dehydrated chives, salt, artificial chicken and shrimp flavors.

An advisory from the Netherlands-based Centre for the Promotion of Imports from developing countries said the EU had banned the use of ethylene oxide in food products due to the health risks.

“Do not use ethylene oxide on spices and herbs if you want to export to Europe. Several countries allow the use of ethylene oxide. But, using it on food products in Europe is illegal,” it warned on its website.

Monde shares, which are listed on the Philippine Stock Exchange (PSE), plummeted 7.22 percent to P13.36 apiece after news of the health warnings broke. (See related story in Business, Page B3.)

Thailand manufactures the noodles and also serves as Monde’s export hub for over 20 countries, according to the company’s latest annual report.

Monde’s Asia-Pacific branded food and beverage business operates eight factories in the Philippines and two in Thailand, which includes a manufacturing plant for seasonings and condiments for instant noodles, the annual report showed.