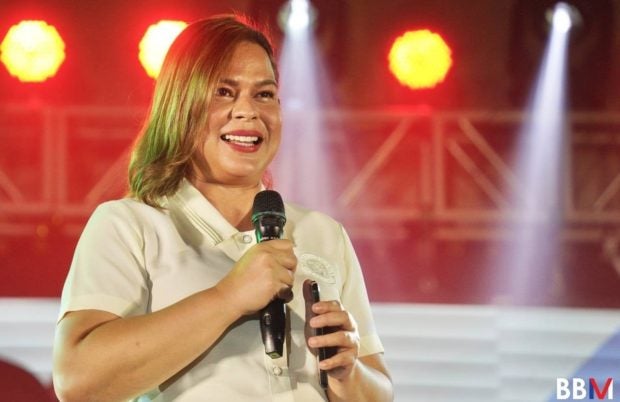 MANILA, Philippines — Vice President Sara Duterte has said she is eyeing partnering with China in the field of education to enhance Filipino students’ academic performance, her office said on Thursday.

The Office of the Vice President (OVP) said this was among the things discussed during the courtesy call of China’s top diplomat Chinese Foreign Minister Wang Yi, on Wednesday.

Duterte, who concurrently sits as the Education Secretary, also cited the possible cooperation with China for education professionals who can teach English to Chinese students.

“She looks forward to partnering with China in the field of education to enhance the academic performance of Filipino students,” the OVP said in a statement.

“She also cited possible cooperation with China in terms of its need for education professionals who can teach English to Chinese students,” it added.

Duterte also told Wang about the concerns of numerous Filipino students eager to return to China to continue their studies.

As for other matters, the Vice President likewise expressed gratitude for China’s support to the Philippines, especially regarding the “Build, Build, Build” program of her father’s, former President Rodrigo Duterte, administration.

“She acknowledged the significant role of China in terms of the construction of the Samal Island-Davao Connector bridge, which she hopes would be completed as soon as possible, as this would bring much economic progress to the people of Davao,” the OVP said.

The OVP said that Wang vowed that China is ready to step up education cooperation with the Philippines.

“He promised that China stands ready to step-up education cooperation and will certainly assist in the facilitation of the return of Filipino students to China aside from increasing the number of scholarships for Filipinos in Chinese education institutions,” it said.

Wang also cited the important role of Vice President Duterte as Education Secretary in uplifting the lives of the Filipinos.

The OVP said he also discussed China’s priority areas of cooperation with the Philippines under the new administration: agriculture, infrastructure, energy, and people-to-people exchanges.