Palace on ‘Noynoying’: Creative but no effect | Inquirer News

Palace on ‘Noynoying’: Creative but no effect 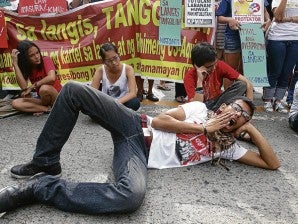 Malacañang sees “Noynoying” as a means to antagonize the Aquino administration but doubts it would have any effect on the public.

Presidential spokesperson Edwin Lacierda said that while Pinagkaisang Samahan ng Tsuper at Opereytors Nationwide (Piston) led the protest march, it still didn’t file a petition for a fare increase that would have benefited both operators and drivers.

“Well, obviously, that’s how they want to antagonize the administration. But that won’t fly. So they’re trying to come up with creative ways,” Lacierda told reporters.

“But the fact is and the truth of the matter is, if Piston is concerned about its members, why did it not file a petition for rate increase in the LTFRB (Land Transportation and Franchising Regulatory Board)?” he said.  Norman Bordadora