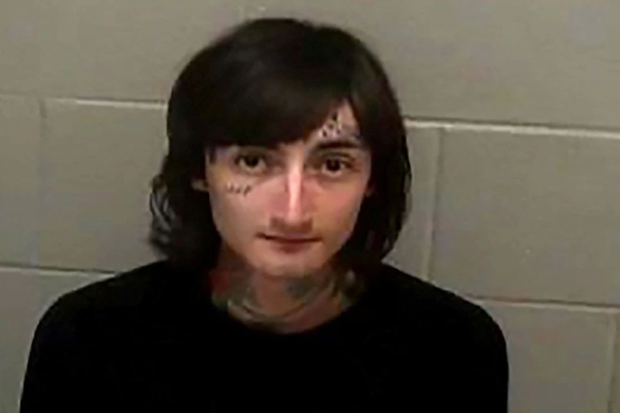 WAUKEGAN, Illinois — The man accused of killing seven people and wounding dozens of others at an Independence Day parade outside of Chicago admitted to authorities that he carried out the shooting, a prosecutor said on Wednesday during the suspect’s first court appearance.

“He does pose, in fact, a specific and present threat to the community,” the judge said in ordering that Crimo to be held.

Crimo spoke only briefly to confirm that he did not have a lawyer. A public defender was appointed to represent him.

Ben Dillon, a county prosecutor, told the court that the suspect had confessed to the July Fourth attack after he was apprehended. There was no plea entered at the hearing.

Eric Rinehart, the state’s attorney for Lake County, said more charges were expected against Crimo, whose next court appearance is scheduled for July 28. If convicted on the first-degree murder charges, he would face a mandatory life prison sentence without the possibility of parole. 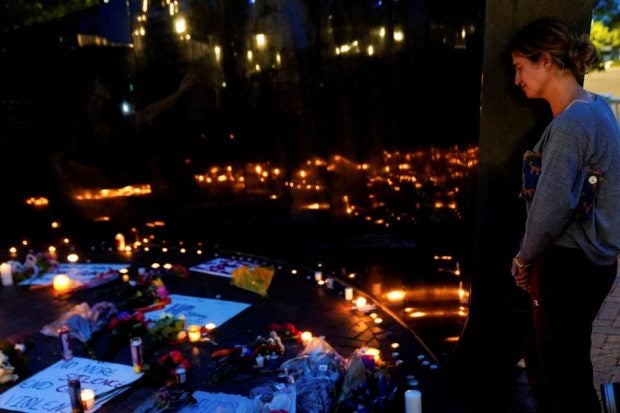 A woman cries as community members gather at a memorial site near the parade route the day after a mass shooting at a Fourth of July parade in the Chicago suburb of Highland Park, Illinois, U.S. July 5, 2022. REUTERS

In a news briefing following the bond hearing, Rinehart said authorities questioned the suspect after reading him his legal rights, including the right to an attorney.

Highland Park is the latest American community forced to come to grips with mass gun violence. The bloodshed there was the latest in a string of mass shootings that have renewed debate about U.S. gun violence, including a May 24 attack in which 19 schoolchildren and two teachers were killed in Uvalde, Texas. On May 14, 10 people were slain in a supermarket in a mostly Black neighborhood in Buffalo, New York.

Authorities said on Tuesday that Crimo planned the Illinois attack for weeks. As the annual parade marched through downtown Highland Park, he climbed on to a rooftop from an alley and fired more than 70 rounds at spectators, they said. He made his getaway dressed in women’s clothing and makeup to cover his facial and neck tattoos, officials said.

The suspect was arrested later on Monday when he was stopped by police at the wheel of his mother’s car, which authorities said he had driven to Wisconsin and back to Illinois following the shooting.

After Wednesday’s hearing Sergeant Chris Covelli, a spokesperson for the Lake County Sheriff’s office said Crimo saw a “celebration” in the city of Madison, Wisconsin, and “seriously contemplated using the firearm he had in his vehicle to commit another shooting.”

A Smith & Wesson semiautomatic rifle, similar to an AR-15, used in the shooting was found at the scene in Highland Park, and Crimo had a similar weapon in his mother’s car when arrested, according to county prosecutors.

Police said they had no immediate evidence of any anti-Semitic or racist basis for the attack. Highland Park has a large Jewish community. Investigators were reviewing videos Crimo had posted on social media containing violent imagery.

Crimo’s parents said in a statement released by their lawyer that they are requesting privacy.

“We are all mothers and fathers, sisters and brothers, and this is a terrible tragedy for many families, the victims, the paradegoers, the community, and our own,” they said. “Our hearts, thoughts, and prayers go out to everybody.” 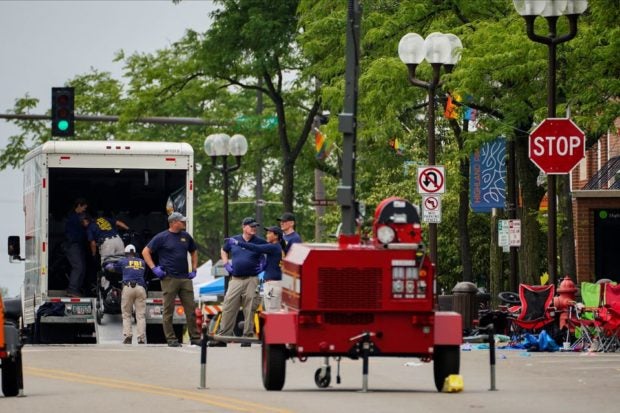 FBI agents clear debris from the scene after a mass shooting at a Fourth of July parade in the Chicago suburb of Highland Park, Illinois, U.S. July 6, 2022. REUTERS

Crimo legally purchased five guns in all, rifles and pistols, despite having come to law enforcement’s attention on two prior occasions for alleged behavior suggesting he might harm himself or others, Covelli said.

The first instance was an April 2019 emergency 911 call reporting Crimo had attempted suicide, followed in September of that year by a police visit regarding alleged threats “to kill everyone” that he had directed at family members, Covelli said.

Police responding to the second incident seized a collection of 16 knives, a dagger and a sword amassed by Crimo in his home, though no arrest was made as authorities at the time lacked probable cause to take him into custody, Covelli said.

Crimo slipped past the safeguards of an Illinois “red flag” law designed to prevent people deemed to have violent tendencies from getting guns.

State police said that the knives were returned to the family later on the day they were confiscated after the father told authorities they were his and stored in his son’s closet for safekeeping. State police acknowledged having received a report from local authorities declaring Crimo a “clear and present danger” after the alleged September 2019 threat to his family.

State police said they closed the matter after determining that Crimo at that time had neither a gun-owner’s identification card to revoke nor an application to deny. Neither of the 2019 incidents surfaced in four background checks conducted during his subsequent firearms purchases, they added.