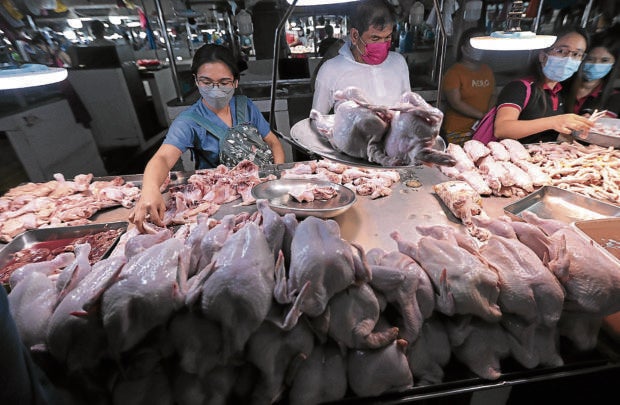 THINNING SUPPLY | Customers buy dressed chicken on Wednesday, July 6, 2022, at a stall in Paco Public Market in Manila owned by Willie Roque, who says he has been experiencing a short supply of poultry for two months now. (Photo by GRIG C. MONTEGRANDE / Philippine Daily Inquirer)

MANILA, Philippines — For the past several days, customers have taken to social media to complain about being unable to buy Chickenjoy, the popular fried chicken meal that has become synonymous with the 44-year-old Jollibee brand of billionaire Tony Tan Caktiong.

Jollibee Foods Corp., the country’s biggest fast-food group, admitted on Wednesday that its best-seller chicken meals were unavailable in several outlets, frustrating diners while underscoring the deepening supply chain problems that have emerged in the postpandemic period.

The problem has also affected Jollibee’s main rival as Bloomberg News reported that some outlets of McDonald’s Philippines were “temporarily” unable to sell chicken meals, according to a company spokesperson.

“Due to continued increase in consumer demand and limited chicken supply in the market that meets our high-quality standards, a small number of stores of Jollibee and Mang Inasal are unable to serve some chicken orders,” Jollibee said in a statement to the Inquirer.

“The supply is already improving and we are continuously working with suppliers to address the immediate demand. We are confident that these select branches will be able to fully serve their customers’ chicken orders soon,” it added.

Spokespersons for other popular restaurant chains, such as Max’s Group and KFC, declined to comment when reached by the Inquirer.

Jollibee customers in Metro Manila and other parts of the country reported the supply shortfall while others complained the chicken dishes were not available using popular food delivery apps.

A Baguio City resident told the Inquirer that chicken was unavailable in six out of nine Jollibee outlets in their area.

Staffers in two separate Jollibee outlets in Quezon City told the Inquirer that chicken was “out of stock” during the past weekend but supplies were slowly returning.

“It’s a mix of both: the supply shortage plus the notion that fast food is cheaper than eating healthy,” Limlingnan said on Wednesday.

In June, a number of restaurant chains removed items from their menus due to a reported shortage of flour and potatoes as they struggled to source raw materials amid global supply chain disruptions worsened by Russia’s invasion of Ukraine in February this year.

United Broilers and Raisers Association president Elias Jose Inciong said various factors, including the quality of feeds, rising feed input costs, and consumers veering away from meat products, have affected the supply of chicken in the country.

He said, however, that it was too soon to tell whether or not there was a nationwide shortage.

“Too early to tell. We shall see maybe by the end of the month. If our farm-gate price shows undersize and runts (chicken that are smaller than average), then we have something else,” Inciong told the Inquirer in a Viber message.

Inciong said the challenges in sourcing high-quality feeds such as soya and corn, exacerbated by the Russia-Ukraine war, resulted in low output and lower quality of chicken.

He noted that prices of corn and soya in the local market were at a five-year historical high. Corn, aside from being a staple food next to rice, serves as the main ingredient for manufacturing animal feeds.

“We have a feed quality problem and on top of that is the fact that it is more costly,” he added.

According to Inciong, the Philippines imports soya. On the other hand, broiler raisers prefer local corn over imported ones, particularly yellow corn due to its “high energy” attributes.

“Unfortunately, it’s a long story but the problem is that corn farmers for the last two years have no confidence in producing because the African swine fever had a huge impact on their market,” he explained.

Inciong said the ASF outbreak, which hit the country in 2019, led to a surplus in supply and a significant portion of their market, comprised of hog raisers, was wiped out due to the animal disease.

He also cited the pressure on them to produce more chicken due to the “increasing shift” from pork to chicken among consumers.

Inciong said they were having a hard time meeting the demand for chicken that rose because pork products have become more expensive.

He recalled that back in the days, small chickens were given away, but as a sign of the times, chickens of that size are now being sold in the market.

“We adjusted production to adjust to the expected demand and unfortunately, the performance of the flocks was affected by the quality of the feeds because we’re having difficulties getting quality raw materials for feeds,” Inciong said in an earlier interview with One News’ “The Chiefs.”

He explained in the interview that their production cycle was 30 to 35 days from loading to harvest. However, since it took longer than usual for chickens to grow, the local supply has been affected.

Chickens replace pigs in Benguet rituals due to ASF