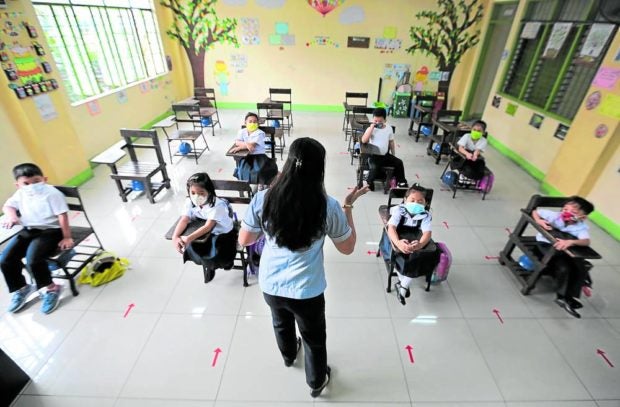 MANILA, Philippines — The government wants to resume in-person classes at full capacity by November this year even with the increasing COVID-19 cases in the country, President Ferdinand Marcos Jr. said on Tuesday.

In his first press briefing as president, Marcos said Vice President Sara Duterte, who is also the education secretary, relayed during their first Cabinet meeting in Malacañang her department’s plan for a gradual resumption of in-person classes for the school year 2022-2023 until full capacity is reached after three months.

“There are some things that are immediately accessible in the sense that we can start doing something about it already. The first thing that is an example of that was Inday Sara’s announcement that we have a plan for full face-to-face (classes) by November of this year,” the president told reporters in Malacañang.

He said the Department of Education (DepEd) would start a phased in-person schooling by September and wanted “100-percent attendance” by November.

The DepEd earlier said that 38,000 schools in the country were ready for in-person classes for the opening of the school year in August.

On Monday, Socioeconomic Planning Secretary Arsenio Balisacan urged the DepEd to immediately resume face-to-face classes, or risk the future Filipino labor force lagging behind those of its neighbors.

“When they join the labor market five to 10 years from now, they will not be as competitive as our neighbors, who have already opened up and provided better access to [education],” Balisacan said.

“This pandemic has been so inequitable; it has exacerbated the inequality of opportunities in education. So we should reduce and address that inequality,” said the chief of the National Economic and Development Authority (Neda).

The country is one of the last to resume full-time in-person classes since the pandemic began, with schools shuttered in March 2020 in tandem with lengthy lockdowns.

The UN children’s agency has warned that school closures have caused enormous losses in education worldwide, with some governments slow to reopen classrooms even as vaccination rates increased. 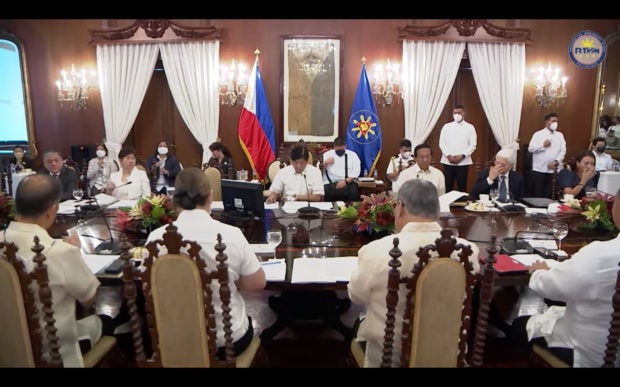 EYES ON THE ECONOMY President Marcos presides over his first Cabinet meeting in Malacañang on Tuesday, telling his officials that the economic managers will set the overall policy that his administration will follow. He is yet to name other members of his Cabinet, including the secretaries for health, environment, science and technology, energy and human settlements. —SCREENGRAB FROM RTVM

“We have a plan for full face-to-face (schooling) by November of this year,” Marcos said. “Let’s get this done quickly. Of course, we’re careful but we’re always in a hurry because we have to get much done in very little time.”

Marcos said school reopenings will start in September and ramp up rapidly over the next two months, accompanied by a vaccination campaign.

About 64 percent of the country’s population of 110 million are fully vaccinated.

Former President Rodrigo Duterte allowed children to return to classrooms in just 100 schools out of more than 61,000 in November last year, but ruled out a full resumption before his term ended last month, citing health concerns.

The policy was seen by critics as exacerbating an education crisis in the country.

“Our teachers have seen a terrible loss of learning since 2020 that is exacerbating poverty,” he said.

Basilio said some teachers in the association had complained that a number of elementary and even high school students still could not read or write.

Modules were poorly vetted and young Filipinos had limited internet access, he said.

A report published jointly last month by Unicef and other agencies said the pandemic had increased “learning poverty” by a third in low- and middle-income countries, with an estimated 70 percent of 10-year-olds unable to understand a simple written text.

Last year, 15-year-olds in the Philippines were at or near the bottom in reading, mathematics, and science, according to data from the Organization for Economic Cooperation and Development.

Also at Tuesday’s Cabinet meeting, Marcos said the country’s economic managers would set the “central policy” that his administration would follow.

“We can all understand that the most important area that we will have to deal with would have to be the economy,” he told his official family to open the meeting.

“The central policy actually that everybody else would be following will be that set out by our economic managers,” he said. 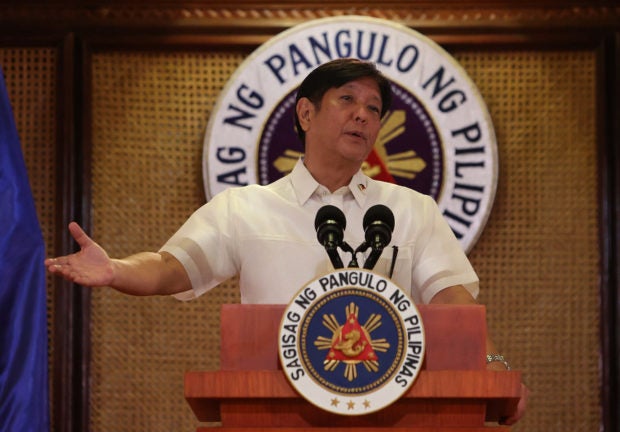 Marcos has yet to appoint the heads of the health, environment and natural resources, science and technology, energy, and human settlements and urban development departments.

The focus on reviving the economy is of prime importance due to the swollen debt burden inherited by the Marcos administration. The unprogrammed expenses because of the COVID-19 pandemic raised the government’s debt burden to more than P12.7 trillion, requiring at least P326 billion in new revenues each year to cover the principal and interest payments.

The president also rejected proposals to cut the number of workers in government to reduce spending.

In a Facebook post, Social Welfare Secretary Erwin Tulfo said Marcos shut down the suggestion during the Cabinet meeting.

“We don’t want anyone out of job at this point,” Tulfo said, quoting the president.

Marcos also shared with reporters that one of his marching orders to the Cabinet was to “streamline the government” in order to improve its services to the people.

“I think that I want to make sure that every department, every agency has already the plan in mind so that our Cabinet secretaries will be coordinated with each other,” he said.

“Let’s get our bureaucracy streamlined. I gave them a relatively free hand in deciding who you want to hire and how you want to change the structure of your department if indeed that’s what you want to do, but do it soon because we have work to do and we have to go to work immediately,” he added.

The president also said he was considering having two Cabinet meetings a week.

“It’s important to me that the entire Cabinet understands what it is we are trying to do, how we’re going to do it, what the timetable is, and how it all fits together,” he said.

President Marcos on Tuesday said the government had enough funds to continue the fuel subsidy program until the end of the year.

Marcos said they discussed during the Cabinet meeting the funding for the fuel subsidy and how to sustain it.

EYES ON THE ECONOMY | President Marcos presides over his first Cabinet meeting in Malacañang on Tuesday, July 5, 2022, telling his officials that the economic managers will set the overall policy that his administration will follow. He is yet to name other members of his Cabinet, including the secretaries for health, environment, science and technology, energy and human settlements. (SCREENGRAB FROM RTVM)

“We have enough budget I think to last for this year and a little bit beyond, but we still have to find that money if we’re going to continue,” he noted.

According to the president, he also wanted to include tricycle drivers in the fuel subsidy program, “which up to now have not been included.”

The previous administration actually provided them with fuel assistance amounting to P6,500 each, but only half or 617,806 of the 1.2 million tricycle drivers nationwide qualified under the “Pantawid Pasada Program for Tricycle Drivers,” according to former Secretary Eduardo Año of the Department of the Interior and Local Government (DILG).

Operators and drivers of public utility vehicles were likewise provided P6,500 each under the government’s fuel subsidy program.

The president also assured the public that the government’s Libreng Sakay program for the Edsa Carousel bus transit line would continue under his administration.

Students, he said, would have a free ride at the Light Rail Transit Line 2 (LRT 2), which goes to the University Belt in Manila.

The Department of Transportation earlier said the free rides on Edsa would continue until December, while students would also enjoy the same on the Metro Rail Transit 3, LRT 2, and the Philippine National Railways.