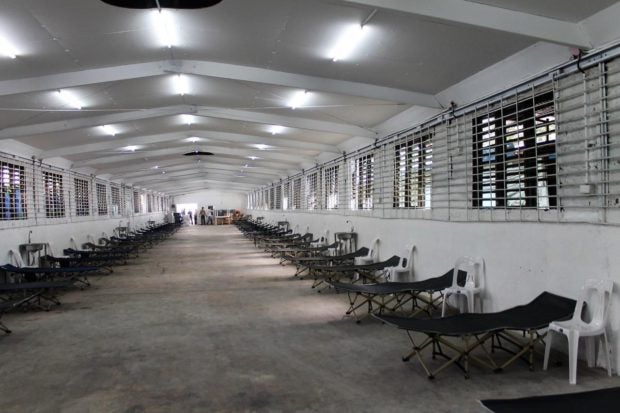 MANILA, Philippines — High-profile inmates infected with COVID-19 who were supposed to be moved to a “comfortable isolation room” had “gradually disappeared” from the New Bilibid Prison’s Building 4 or Site Harry.

The National Bureau of Investigation (NBI) revealed this and said that – quoting witnesses – inmates disappeared from isolation facility Site Harry after disclosing they would be relocated “to the ‘comfortable’ isolation room.”

Witnesses also said that aside from that, they did not observe anything unusual inside the isolation facility even when either curtains or plywood only separated their rooms, the NBI added.

Site Harry is a quarantine facility set up with the assistance of the Department of Health and the International Committee of the Red Cross inside the national penitentiary to serve as an isolation site for inmates and jail personnel who tested positive for the coronavirus.

“The only irregular observation they made was their co-PsDL (Persons Deprived of Liberty) gradually disappeared from Building 4 after they had revealed that they were to be transferred to the ‘comfortable’ isolation room,” the NBI said in a complaint filed against  22 members of the National Capital Region Office (NCRPO).

A murder complaint was filed last Friday, July 1, for the death of eight inmates who died from May to June 2020. The police officers allegedly used COVID-19 to cover up the real cause of their death.

These inmates were convicted for their involvement in illegal drugs, the NBI said.

“All the deceased PsDL were declared dead on arrival, the cause of death either by cardiac or pulmonary arrest. However, a close examination of the medical profile of the deceased high-profile PsDL generally revealed that days before they died, they exhibited neither chronic symptoms of Covid-19, including difficulty in breathing or shortness of breath, nor were they observed to be weak or particularly ill,” the NBI said in the complaint submitted to the Department of Justice.

The NBI added that: “Witnesses had seen them to be well, normal, or lively.”

The NBI said the suspects took advantage of the fact that the victims were at an isolated facility due to COVID-19.

“They availed the situation that in case of COVID-19 cases, cadavers should immediately be cremated. Cremation, for this case, was the final act to consummate and effectively cover up the scheme to kill the victims,” the NBI said.

Meanwhile, Justice Secretary Jesus Crispin “Boying” Remulla will be reviewing the findings of the NBI on the death of high-profile inmates.

Jose Dominic Clavano, a lawyer assigned at the Office of the DOJ Secretary, said that the questions surrounding the death of the inmates have already been brought to the attention of Remulla and he has already taken steps to verify the information.

“We are looking deeper into the matter. There are facts we need to validate from the NBI to hold all those involved accountable,” Clavano said.