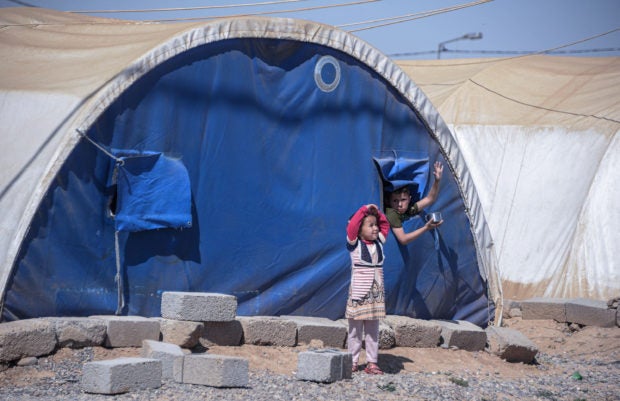 Children play around their tent at the Jadaa rehabilitation camp for the displaced near the northern Iraqi city of Mosul, on May 11, 2022. AFP

PARIS — France has repatriated 35 children and 16 mothers from camps in Syria holding family members of suspected jihadists since the Islamic State group was ousted in 2019, the foreign ministry said.

“France has today undertaken the return to the country of 35 French minors who were in camps in northeast Syria. This operation also includes the return of 16 mothers from these same camps,” a statement from the foreign ministry said.

It added that the minors were handed over to child protection services while the mothers would face judicial proceedings.

Rights groups have long urged the French government to bring home some 200 children in detention who were either brought to IS territory by their parents or born there during the years of fighting.

They are being held in Kurdish-run camps in northeast Syria where malnutrition and disease is rife.

One of the biggest and most overcrowded is Al-Hol where two children die every week on average, according to a report by the Save the Children campaign group last September.

France has argued that its security concerns are paramount, having suffered a series of attacks from IS jihadists, including the November 2015 assaults on the Bataclan concert hall and other targets around Paris that left 130 people dead.

Many of the children are with their mothers or fathers who pose a risk, and France has insisted that French nationals face local justice.

Before Tuesday’s operation, France had repatriated 126 children since 2016.

France carries out first air strikes on IS in Syria

France’s Hollande on Syria ceasefire: ‘It must be fully respected’

US, France vow ‘joint response’ if chemical attack in Syria