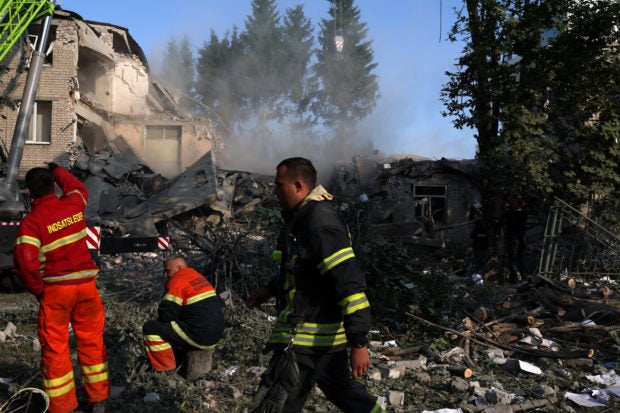 First responders work on the scene where a school was destroyed by early morning shelling as Russia’s attack on Ukraine continues in Kharkiv, Ukraine, July 4, 2022. REUTERS/Leah Millis

KYIV — Ukrainian President Volodymyr Zelensky said on Monday his armed forces were undeterred in their efforts to “break” Moscow’s will to pursue a nearly five-month war, while Russia’s Vladimir Putin hailed his military’s victory in the grueling battle of Luhansk.

Russia captured the city of Lysychansk in eastern Ukraine on Sunday, bringing an end to one of the biggest battles in Europe in generations and completing its conquest of Luhansk province, one of two regions it has demanded Ukraine cede to separatists in the Donbas region.

With the war entering its next phase, Ukrainian forces took up new defensive lines in the eastern part of the country.

“There have been no significant changes on the battlefield in the past 24 hours,” Zelensky said in a nightly video message. “The Armed Forces of Ukraine respond, push back and destroy the offensive potential of the occupiers day after day. We need to break them. It is a difficult task. It requires time and superhuman efforts. But we have no alternative.”

Earlier in the day, Putin congratulated Russian forces on “victories in the Luhansk direction”. Participants in that combat should “absolutely rest and recover their military preparedness,” while units in other areas keep fighting, the Russian president said in a brief televised meeting with his defense minister.

The battle for Luhansk is the closest Moscow has come to achieving one of its stated objectives since its forces were defeated trying to capture Kyiv in March. It marks Russia’s biggest victory since it captured the southern port of Mariupol in late May.

Both sides suffered thousands of dead and wounded, while claiming they inflicted far greater losses on the other side, along a loop of the Siverskyi Donets river that winds through Luhansk and Donetsk.

Relentless Russian bombardment razed to a wasteland Lysychansk, neighboring Severodonetsk and surrounding towns, many of which had heavy industrial plants that defenders used as fortified bunkers. Russia had repeatedly tried and failed to surround the Ukrainians, eventually opting to blast them out with artillery.

Military experts said the battle could be a turning point in the war, making a big impact on both sides’ ability to fight on, even though the strategic value of the ruined cities themselves is limited.

“I think it’s a tactical victory for Russia but at an enormous cost,” said Neil Melvin of the RUSI think tank in London. He compared the battle to the huge fights for meager territorial gains that characterized World War One.

“This has taken 60 days to make very slow progress,” he said. “I think the Russians may declare some kind of victory, but the key war battle is still yet to come.”

Ukraine could have withdrawn from Luhansk weeks ago but chose to keep fighting to exhaust the invasion force. It hopes the ferocious battle will leave the Russians too depleted to hold gains elsewhere.

Serhiy Gaidai, the Ukrainian governor of Luhansk, acknowledged his entire province was now effectively in Russian hands, but told Reuters: “We need to win the war, not the battle for Lysychansk … It hurts a lot, but it’s not losing the war.”

Gaidai said Ukrainian forces that retreated from Lysychansk were now holding the line between Bakhmut and Sloviansk, preparing to fend off a further Russian advance.

The mayor of Sloviansk said heavy shelling on Sunday had killed at least six people, including a 10-year-old girl.

Russia’s Tass news agency quoted military officials in the Donetsk Peoples’ Republic as saying three civilians died and 27 were injured in what they said was shelling by Ukrainian forces.

Reuters could not verify the battlefield accounts.

Rob Lee, of the U.S.-based Foreign Policy Research Institute, said the new Ukrainian defensive line should be easier to defend than the pocket in Luhansk province that was given up.

“It’s something that Putin can show as a sign of success,” he said. “But overall, this doesn’t mean Ukraine will have to concede or give in any time soon.”

Russia has said its “special military operation” in Ukraine is meant to demilitarize its southern neighbor and protect Russian speakers from what it calls nationalists.

Ukraine and its Western allies say this is a baseless pretext for flagrant aggression that aims to seize territory.

Speaking at a conference in the Swiss city of Lugano, Ukrainian Prime Minister Denys Shmygal said the cost could reach $750 billion and rich Russians should help pay the bill.

Melvin, the RUSI expert, said the decisive battle for Ukraine was likely to take place not in the east, where Russia is mounting its main assault, but in the south, where Ukraine has begun a counter-offensive to recapture territory.

“This is where we see the Ukrainians are making progress around Kherson. There are counter-attacks beginning there and I think it’s most likely that we’ll see the momentum swing to Ukraine as it tries to then mount a large-scale counter-offensive to push the Russians back,” he said.

Ukraine’s hopes for a sustained counter-attack rest in part on receiving additional weapons from the West, including rockets that can neutralise Russia’s huge firepower advantage by striking deep behind the front line.

Last week, Ukraine scored its own major victory, driving Russian forces off Snake Island, a desolate but strategic outcrop in the Black Sea that Moscow captured on the war’s first day but could no longer defend from Ukrainian strikes.

Swedish Prime Minister Magdalena Andersson said the best way to end the war was to increase support to Ukraine and ramp up pressure on Russia. “We are open to further sanctions” on Russia, Andersson said at a news conference alongside Zelensky earlier on Monday, adding that Moscow should not be allowed to make gains from its invasion.

Sweden, along with its neighbor Finland, recently applied for membership in NATO. Andersson said it could take a year before her country is a full member of the alliance.