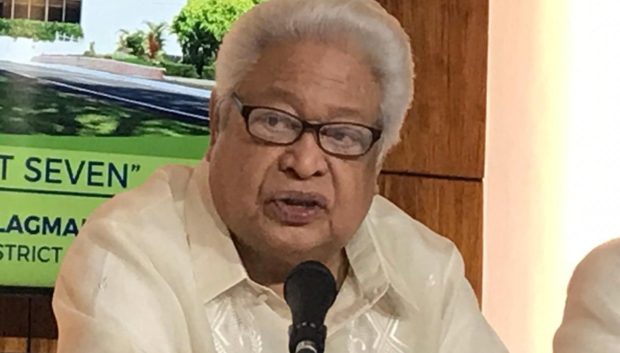 MANILA, Philippines — Albay Rep. Edcel Lagman has filed anew a bill that would legalize divorce, saying the state “cannot abandon couples and their children in a house on fire.”

In filing House Bill No. 78, or the proposed “Absolute Divorce Act,” Lagman maintained that the measure is “an apt sequel to the Reproductive Health Act,” claiming that divorce is also a women’s rights issue.

In his explanatory note, the Albay representative pointed out: “It is fact that some marriages break down even with the couples’ resolute and repeated efforts to solve differences and reconcile.”

He noted that divorce is primarily an issue on women’s rights, saying, “Not being able to get out of a loveless, unhappy, even abusive marriage is a human rights concern for women.”

“When there is physical violence in a relationship, women are almost always at the receiving end of a fist or an open palm and it is the obligation of the State to ensure this does not intensify to the use of a knife or firearm,” he said.

The lawmaker pointed out that, through the Absolute Divorce Act, “beleaguered and tormented wives can soon be liberated from irretrievably dysfunctional marriages or inordinately abusive marital relations.”

According to Lagman, absolute divorce is “definitely not for couples in harmonious, happy and vibrant marital relationships,” but is “for the exceptional cases when the marital union is irremediably severed.”

Under the measure, court proceedings for absolute divorce would be made “affordable, expeditious and inexpensive.”

Grounds for divorce include physical abuse; moral pressure to change religious or political affiliations; attempt to induce a child to engage in prostitution or connivance in such; final judgment of over six years of imprisonment; drug addiction, habitual alcoholism or chronic gambling; homosexuality; bigamy; marital infidelity or perversion; attempt on the life of petitioner and unjustified abandonment.

Divorce should not be an ‘easy’ option for couples – Marcos