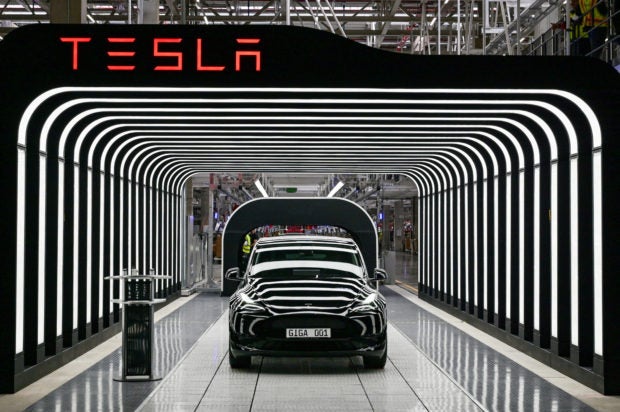 Model Y cars are pictured during the opening ceremony of the new Tesla Gigafactory for electric cars in Gruenheide, Germany, March 22, 2022. (Patrick Pleul/Pool via REUTERS/File Photo)

The world’s biggest electric car maker said on Saturday that it delivered 254,695 vehicles in the April to June period, compared with 310,048 vehicles in the preceding quarter, ending a nearly two-year-long run of record quarterly deliveries.

A resurgence in COVID-19 cases in China had forced Tesla to temporarily suspend production at its Shanghai factory and also affected suppliers’ facilities in the country.

Tesla is ramping up production at the Shanghai factory with the easing of the COVID-19 lockdown, which will help boost deliveries in the second half.

Early in June, Chief Executive Officer Elon Musk told executives that he had a “super bad feeling” about the economy and needed to cut about 10% of staff at the electric car maker.

In June, Tesla again hiked prices for some of its models in the United States and China after Musk had warned of significant inflationary pressure in raw materials and logistics.

June 2022 was the highest vehicle production month in the company’s history, Tesla said in a news release.

Analysts had expected Tesla to report deliveries of 295,078 vehicles for the April to June period, according to Refinitiv data. Several analysts had slashed their estimates further to about 250,000 due to China’s prolonged lockdown.

The world’s most valuable automaker has posted record deliveries every quarter since the third quarter of 2020, weathering pandemic and supply-chain disruptions better than most automakers.

China has been instrumental in Tesla’s rapid increase of vehicle production, with the low-cost, lucrative Shanghai factory producing roughly half of the company’s total cars delivered last year.

Musk said in April that Tesla’s overall vehicle production in the second quarter would be “roughly on par” with the first quarter, driven by a China rebound.

But he recently said Tesla had a “very tough quarter,” citing production and supply-chain challenges in China. Musk also said Tesla’s new factories in Texas and Berlin are “gigantic money furnaces” losing billions of dollars as they struggle to increase production quickly.

Tesla shares have fallen 35% so far this year, hit by Musk’s $44 billion proposed acquisition of Twitter Inc, the China lockdown and macroeconomic uncertainties.

Read Next
More than a million pack London’s streets for Pride parade
EDITORS' PICK
What to watch out for when selecting a video surveillance solution
Heads may roll at BOC, says Palace if sugar smugglers are allowed to use recycled import permits
vivo brings to the Philippines a powerful smartphone with a slimmer body, the vivo Y02s for only PHP 6,499
DOH reports increase in daily COVID-19 deaths, mostly unvaxxed
Palace: Biggest supermarkets in PH commit to sell sugar at P70 per kilo
House energy committee chair Arroyo bats for cheap electricity
MOST READ
Alyssa Valdez to miss Creamline’s AVC Cup campaign
DOJ indicts bank officer in $2.1 billion Wirecard fiasco
Peso loses ground vs US dollar
DepEd to give teachers P5K cash allowance within first week of classes
Don't miss out on the latest news and information.