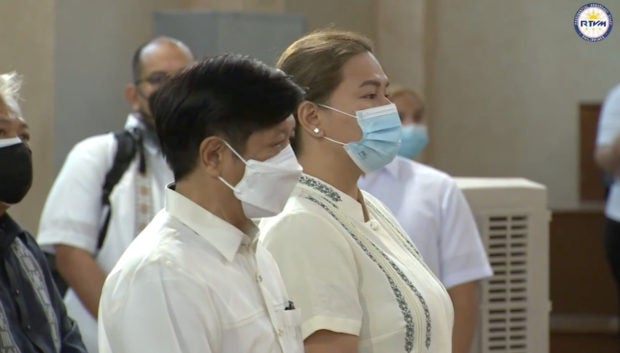 President Ferdinand “Bongbong” Marcos Jr. and Vice President Sara Duterte during a mass on the first day of their term. Screengrab from RTVM / Facebook

MANILA, Philippines — With the new administration of President Ferdinand “Bongbong” Marcos Jr. taking over, the Palace has declared certain positions in the executive department vacant.

Under Memorandum Circular No. 1 signed by Executive Secretary Vic Rodriguez, the Palace declared as vacant certain positions in offices, agencies, and bureaus under the executive department vacant effective noontime of June 30.

The memorandum states that vacancy in the heads of departments, offices, agencies, and bureaus where no replacement has been appointed or designated, shall be filled up by the next-in-rank and most senior official as officer-in-charge.

“The OIC shall perform the duties and discharge the responsibilities of the office until 31 July 2022, or until a replacement has been appointed or designated, whichever comes first,” the memorandum states.

Meanwhile, affected contractual and/or casual employees whose contracts expired on June 30 shall continue in service until July 22, unless otherwise earlier terminated or renewed by the heads of the hiring agencies.

It is a common practice for new presidents to have their first memorandum circulars revolve around movements in posts in the executive department.

In 2016, former President Rodrigo Duterte ordered that government officials and employees whose appointments are coterminous with the appointing authority and whose positions are within an agency’s plantilla, except the head of agency, continue serving in hold-over capacity for a month.

Marcos took his oath as the 17th president of the Philippines on Thursday, June 30.