Cyclones have no direct effect, but intensified habagat to bring heavy rains 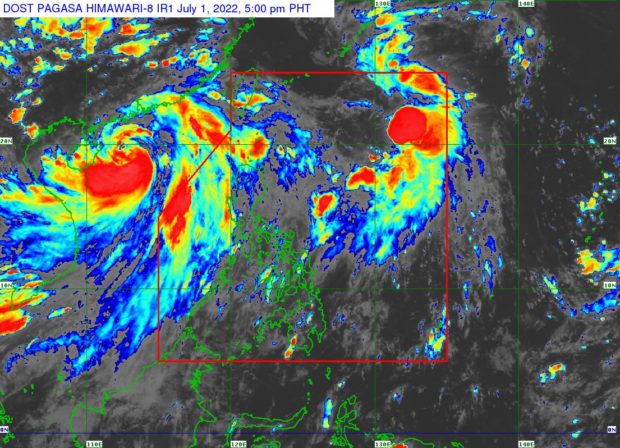 Domeng further intensifies as it moves northward over the Philippine Sea. (Photo from PAGASA-DOST)

MANILA, Philippines — The two tropical cyclones near the Philippines have no direct effect on the country, but these would intensify the southwest monsoon or habagat, which will bring heavy rains in some parts of Luzon, according to the state weather bureau.

Weather updates from the Philippine Atmospheric, Geophysical and Astronomical Services Administration (Pagasa) on Friday afternoon indicated that the habagat enhanced by Tropical Storm Domeng and Severe Tropical Storm Chaba might cause moderate to heavy rains over the Kalayaan Islands.

Moderate to heavy rains may also be felt in Metro Manila and the rest of Luzon, Pagasa said.

As of Friday afternoon, Domeng was last seen 975 kilometers east of extreme Northern Luzon, packing maximum sustained winds of 75 kilometers per hour (kph) and gustiness of 95 kph.  It is still making a northward movement at speeds of 15 kph.

For now, no landfall scenario is expected for Domeng, as forecast tracks say it will continue moving northwest, leaving the Philippine area of responsibility (PAR) around Saturday afternoon and proceeding towards the southern waters of Japan.

During that time, Domeng is also seen to intensify into a severe tropical storm before moving closer to the eastern waters of China.

As for Chaba, which was called “Caloy” when it was still inside PAR, Pagasa said it was last seen 815 kilometers west of Northern Luzon.  Both Domeng and Chaba pull the southwest monsoon to the Luzon landmass, resulting in rains and strong winds.

Pagasa also noted that a gale warning remains raised over the western coast of Luzon, particularly waters surrounding the entire Ilocos Region, provinces of Zambales, Bataan, and the western waters of Occidental Mindoro and Lubang Island and Palawan, including Kalayaan Islands.

Fisherfolk and small boat operators are not allowed to set sail in these areas as waves may reach 2.8 meters to 4.5 meters.

No Tropical Cyclone Wind Signal has been raised as none of the cyclones have any direct impact on the country, but Pagasa warned that gusty conditions with a strong breeze to gale-force winds might prevail over the extreme northern Luzon and the western portions of Luzon and Visayas.