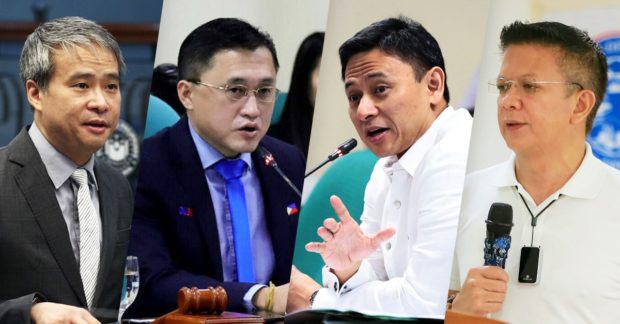 MANILA, Philippines — Four senators on Friday expressed support for the plans and programs of the administration of President Ferdinand “Bongbong” Marcos Jr.

The senator said he would coordinate with the economic managers of the new administration, including Migrant Workers Secretary Susan “Toots” Ople and Labor Secretary Bienvenido Laguesma, for programs for the welfare of workers.

“Some of these programs include the institutionalization of the National Employment Strategy and the TUPAD Emergency Employment program, which will continue the programs initiated by the outgoing administration,” Villanueva said.

“These programs are very appropriate for addressing the effects of the current crises on our workers, particularly those from the transportation and agriculture sectors,” he added.

In congratulating Marcos, Senator Bong Go said he is ready to work with his fellow legislators and help realize the new administration’s aspirations for the Filipinos.

“I will continue to push for various bills that will further strengthen our adaptability and resilience as one nation, particularly in health, infrastructure, food security, economy, better governance and welfare of our people, among others,” Go said.

“With a solid foundation inherited from the Duterte administration, paraphrasing your inaugural speech, we will build on the successes that are already happening in our country, continue to make the lives of our people more comfortable, and ensure that no Filipino will be left behind in our road towards fuller recovery,” he added.

He also joined Marcos’ call for unity, which was a consistent message of the president during the campaign period.

“I am confident that, given your resounding message of unity and rejection of politics of division, we will all be able to overcome whatever challenges we have now and in the future with you as the new captain of the ship,” Go said.

Meanwhile, Senator Francis Escudero called on Filipinos to support the administration “as it charts the country’s future amid the many challenges facing the nation in these trying times.”

(I am in support of his aspiration to provide effective and immediate solutions to overcome the issues faced by the country. We are all hands on deck towards the country’s faster recovery.)

“It is my hope that political parties, regardless of beliefs, persuasion or ideology, can set aside their differences so we can address with determination and resolve the big task that is before us: to make the lives of 110 million Filipinos better,” he added.

Senator Sonny Angara expressed confidence that Marcos “will lead the country to new heights,” citing the “strong economic team that will build on the gains of the Duterte administration and steer the economy towards recovery.”

“With the votes of over 31 million Filipinos behind him, President Bongbong can be assured of the support of a strong majority of the country for his policies and programs, many of which have already been laid out in the past weeks,” Angara said.

Angara likewise lauded Marcos’ move to take on the job of agriculture secretary, saying it demonstrates “his commitment towards addressing the numerous problems of this sector.”

“We look forward to working with President Marcos and his administration, as well as with his equally competent Vice President Sara Duterte. Together with the entire nation, we pray for the success of the Marcos administration,” Angara said.