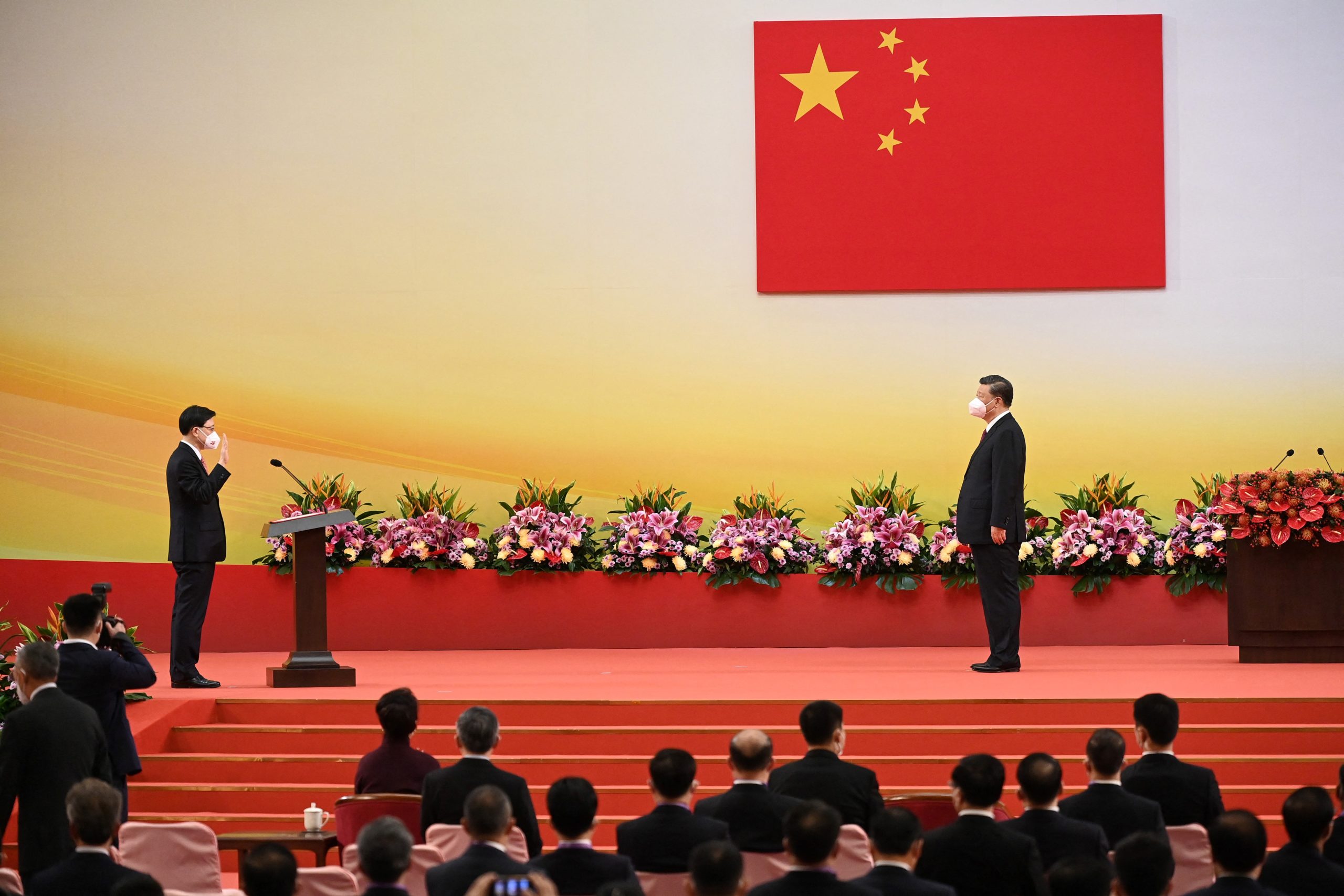 China’s President Xi Jinping (R) looks on as Hong Kong’s incoming Chief Executive John Lee (L) is sworn in as the city’s new leader, during a ceremony to inaugurate the city’s new government in Hong Kong on July 1, 2022, on the 25th anniversary of the city’s handover from Britain to China. (Photo by Selim CHTAYTI / POOL / AFP)

The ceremony, which includes the inauguration of Hong Kong’s new government, is a chance for the Chinese Communist Party to showcase its power over the city after unleashing a harsh crackdown that has crushed the business hub’s democracy movement.

It is Xi’s first trip out of mainland China since the beginning of the COVID-19 pandemic and his first to Hong Kong since massive protests overwhelmed the city in 2019.

“After the storms, Hong Kong has been reborn from the fire and emerged with robust vitality,” Xi said upon arriving by high-speed train on Thursday afternoon.

Friday’s celebrations began with a flag-raising ceremony at the city’s Victoria Harbor, complete with a military flypast and a flotilla spraying plumes of water.

Buffeted by strong winds, a crowd including incoming chief executive John Lee watched as goose-stepping soldiers released the Hong Kong and Chinese flags to the sound of the national anthem.

Xi was not present — local media reported he had spent the night in the neighboring mainland city of Shenzhen and traveled back into the city on Friday morning.

Friday also marks the halfway point of the 50-year governance model agreed by Britain and China under which the city would keep some autonomy and freedoms, known as One Country Two Systems.

The anniversary used to be a prime example of those freedoms in action.

For decades after the handover, in parallel to the official celebrations, every July 1 hundreds of thousands of residents would take part in a march to voice political and social grievances.

But that march, like all mass gatherings in Hong Kong, has been banned by police for the last two years, under a mixture of coronavirus restrictions and a security crackdown.

Critics say that crackdown, strengthened under a national security law imposed by Beijing in 2020, has betrayed the promise that Hong Kong would retain its way of life after the handover.

“We made a promise to the territory and its people and we intend to keep it, doing all we can to hold China to its commitments,” British Prime Minister Boris Johnson said Thursday.

In the United States, Secretary of State Antony Blinken lamented an “erosion of autonomy” in the city, saying: “We stand in solidarity with people in Hong Kong and reinforce their calls for their promised freedoms to be reinstated.”

Australia on Friday echoed the US language, saying it was “deeply concerned by the continuing erosion of Hong Kong’s rights, freedoms and autonomy”.

But Xi insisted Thursday that One Country Two Systems would guarantee “long-term stability and prosperity in Hong Kong”.

Those coming into the president’s orbit — from the schoolchildren who welcomed him at the train station to the highest-ranking government officials — have been made to limit their social contacts, take daily PCR tests and spend days in a quarantine hotel.

Parts of the city have been closed off, and media coverage has been tightly restricted.

Authorities have also moved to eliminate any potential source of embarrassment during Xi’s time in the city, with national security police making at least nine arrests over the past week.

More than 10 members and volunteers of the League of Social Democrats (LSD) — one of Hong Kong’s few remaining opposition groups — were told by police not to protest. Six party members also said their homes were searched.

Authorities have sought to portray an image of public support for the celebrations, with signs proclaiming a new era of “stability, prosperity, opportunity” ubiquitous throughout the city.

In the city’s Victoria Park, the football pitches which used to be the gathering point for July 1 march-goers are being used for a display celebrating the anniversary.

The centerpiece is a huge Chinese national flag sided with a slightly smaller Hong Kong flag, each occupying half of a soccer pitch.

Xi’s visit dominated Chinese state media on Friday too, with photos of the leader’s arrival in Hong Kong splashed across front pages.

“It’s clear that the hands of interference of those anti-China forces who scheme to destabilize Hong Kong have been cut off by the national security law for Hong Kong,” said an editorial in the state-run tabloid Global Times.