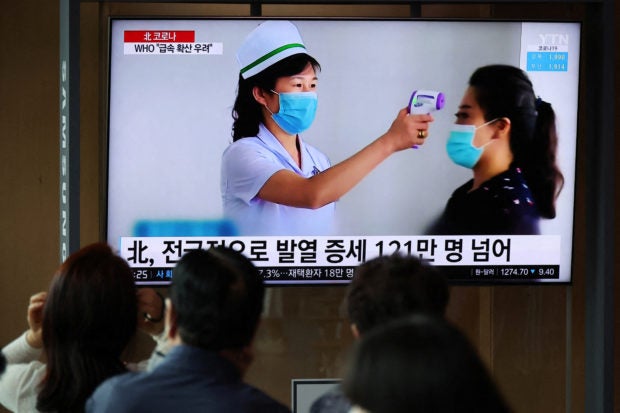 People watch a TV broadcasting a news report on the coronavirus disease (COVID-19) outbreak in North Korea, at a railway station in Seoul, South Korea, May 17, 2022. (REUTERS/File Photo)

SEOUL  – North Korea claimed on Friday the country’s first COVID-19 outbreak began with patients touching “alien things” near the border with South Korea, apparently shifting blame to the neighbour for the wave of infections that hit the isolated country.

Announcing its probe results, the North ordered its people to “vigilantly deal with alien things coming by wind and other climate phenomena and balloons in the areas along the demarcation line and borders.”

According to the state media KCNA, an 18-year-old soldier and a five-year-old kindergartener who contacted the unidentified materials “in a hill around barracks and residential quarters” in the eastern county of Kumgang in early April showed symptoms and later tested positive for the coronavirus.

“The investigation results showed that several persons coming from the area of Ipho-ri in Kumgang County of Kangwon Province to the capital city in mid-April were in fever and a sharp increase of fever cases was witnessed among their contacts,” the state media said.

The KCNA said all other fever cases reported in the country till mid-April were due to other diseases, but it did not elaborate.

North Korean defectors and activists in South Korea had for decades flown balloons carrying leaflets and humanitarian aid across the heavily fortified border.

The government of former President Moon Jae-in barred the campaigns in 2020, citing safety concerns of residents on the border, but activists called the ban an attempt to whitewash Pyongyang and silence critics amid efforts to improve cross-border ties.

North Korea has been battling its first outbreak of COVID infections, declaring a state of emergency in May after years of enforcing tight restrictions to prevent the virus from entering the country.

In July 2020, the North’s leader Kim Jong Un declared an emergency and imposed a three-week lockdown on Kaesong town, near the inter-Korean border, after a man who defected to the South in 2017 returned to the city showing COVID symptoms.

The North has claimed the COVID wave has shown signs of subsiding, though experts suspect under-reporting in the figures released through government-controlled media.

North Korea reported 4,570 more people with fever symptoms on Friday, with the total number of fever patients recorded since late April at 4.74 million.

Pyongyang has been daily announcing the number of fever patients without specifying them as COVID patients, apparently due to a lack of testing kits.