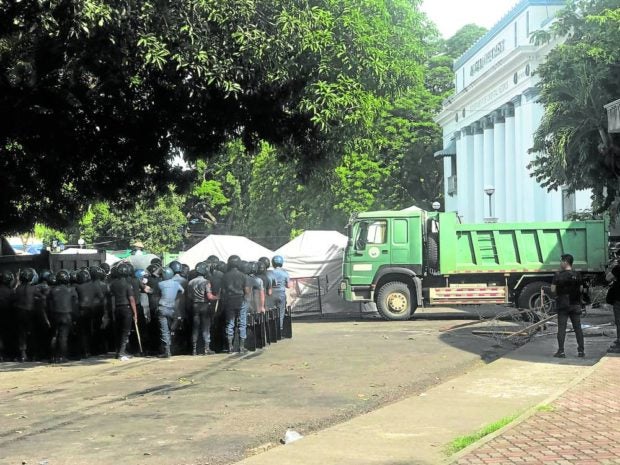 TENSION Policemen are stationed at the Negros Oriental capitol grounds to ensure peace and order as supporters of Roel Degamo, who lost his reelection as governor, gather to prevent Gov. Pryde Henry Teves from entering his office on Thursday. —KARLOWE BRIER

DUMAGUETE CITY—Tension rose here on Thursday after at least 100 supporters of outgoing Negros Oriental Gov. Roel Degamo gathered in front of the provincial capitol to prevent the new governor from assuming his post.

The protesters put up barbed wires while 10 government trucks were sent to the capitol compound to prevent Gov. Pryde Henry Teves, who stopped Degamo’s reelection bid, from entering the building.

Teves, a member of the Nationalist People’s Coalition party, on Thursday morning took his oath of office at the Dumaguete City Hall of Justice located about 100 meters away from the capitol.

After the ceremony, Teves decided to temporarily hold office at the province’s legislative building where he released his first executive order that mandated law enforcers to do a “security sweep” or ensure peace and order at the capitol compound.

Policemen in full battle gear were sent to the Negros Oriental capitol but some protesters threw stones at them.

As of 5 p.m. on Thursday, it was unclear whether Degamo was inside the capitol.

The conflict stemmed from an election dispute caused by a third gubernatorial candidate, Grego Gaudia Degamo, who registered his name in his certificate of candidacy as Ruel Degamo.

The defeated governor wanted the votes obtained by Ruel Degamo to be counted in his favor after the latter was declared a nuisance candidate by a division of the Commission on Elections (Comelec) on Dec. 21, 2021.

The case, however, was pending at the Comelec en banc after Ruel Degamo filed a motion, asking the poll body to reconsider its decision to disqualify him.

Degamo, who ran under Nacionalista Party, and his supporters said Ruel Degamo spoiled his reelection bid and that his votes must be counted in favor of the former governor.