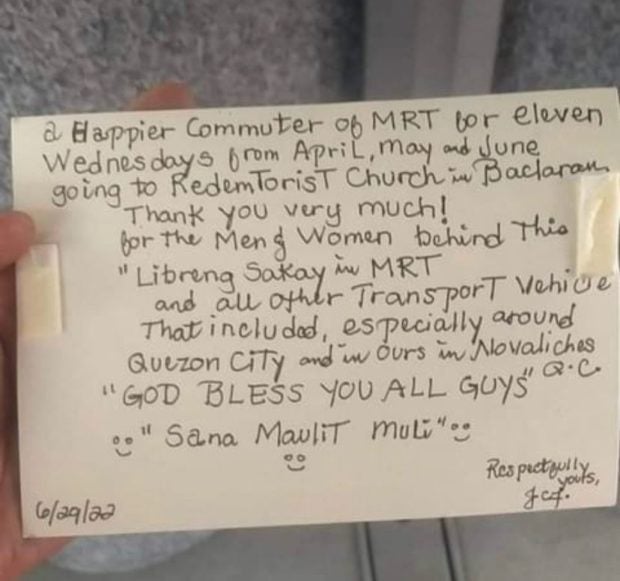 A thank-you note from a train commuter. Image from DOTr-MRT 3 / Facebook

MANILA, Philippines — A random passenger left a thank you note on one of the trains of Metro Rail Transit Line 3 (MRT-3) as its “Libreng Sakay” (free ride) program ended on Thursday.

The program was launched on March 28 by the Department of Transportation (DOTr), allowing commuters to avail of free transport anytime between the line’s operating hours from 4:40 a.m. to 10:10 p.m.

A day before its scheduled end, a passenger — who described oneself as a “happier commuter” who rode the train for eleven Wednesdays to Redemptorist Church in Baclaran from April to June —  left a message on one of MRT’s trains, expressing thanks for the program.

“Thank you very much for the men and women behind this Libreng Sakay in MRT and all other transport vehicles that (are) included, especially around Quezon City and ours in Novaliches. God bless you all guys. Sana maulit muli (hope this will be repeated),” the passenger said.

The MRT-3 Management then also thanked its passengers for their messages of gratitude for the program.

“Rest assured that we will try even harder to provide only the best, most efficient, and most comfortable service for the riding public,” it said in a statement.