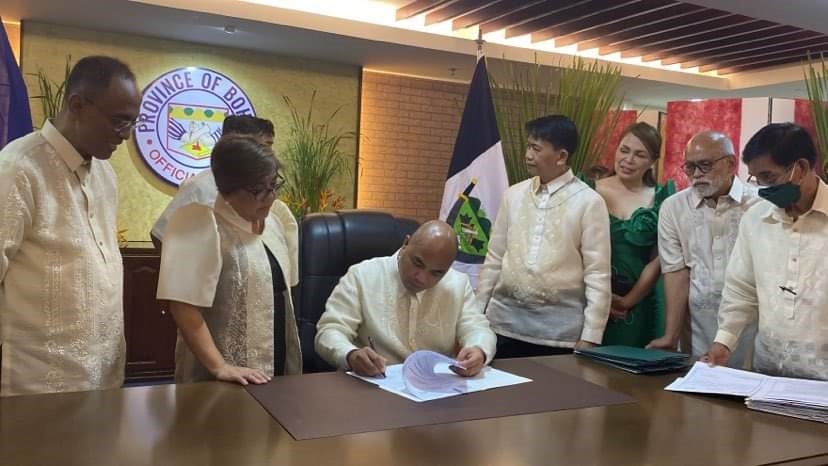 TAGBILARAN CITY — No more “Ivans” at the Bohol capitol.

This was the pledge of Gov. Erico Aristotle “Aris” Aumentado as he took his oath of office in Bohol province on Thursday.

He lamented that Boholano businessmen could not do business in the capitol because of heavy obstacles like the reported huge kickbacks.

“We may be able to unmask the face or faces of that notorious “Ivan” or not but we will make sure that our dealings will be transparent and above-board. We owe this to our fellow Boholanos. And I personally owe this to my late father who had served his people with no stain of corruption,”he added.

“Ivan” is the alleged “tong” collector who victimized the quarry industry in the province and was the subject of the investigation by the provincial law-making body.

The modus operandi of “Ivan” for the systematic extortion starts with the alleged extraction by “Ivan” together with a capitol security official of P50.00/cu.m. of the estimated volume of limestone (anapog) from the hapless quarry operators in exchange for the approval of their quarry application and/or issuance of delivery receipts.

After his inauguration, Aumentado signed an executive order creating an office for Governance Accountability and Review, which should look into the reported questionable deals of the past administration in the procurement process, securing contracts, and obtaining loans.

“’Good governance, development for all Boholanos!’ That was the call to arms of Aris Aumentado that echoed during the campaign. This will be the same call that will reverberate in the halls of the Capitol and throughout the ends of our province, ” said Aumentado.