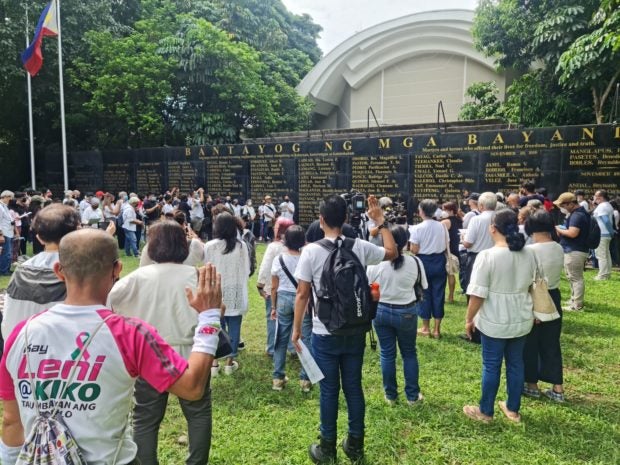 Martial law victims and their families take an oath to continue fighting for the truth at the Bantayog ng mga Bayani in Quezon City on Thursday, June 30, 2022. They call on President Ferdinand Marcos Jr.’s administration not to stop the Freedom Memorial Museum’s construction. INQUIRER.net/Tetch Torres-Tupas

MANILA, Philippines — Victims of martial law atrocities have called on the administration of President Ferdinand Marcos Jr. not to block the construction of the Freedom Memorial Museum.

Bidding for its construction was held in 2020. The target opening of the museum is this September 23, the 50th anniversary of the declaration of martial law.

READ: Martial law museum to rise on UP Diliman campus

Rosales said what they want is not to be forgotten.

LOOK: Survivors of martial law and their families are at the Bantayog ng mga Bayani and took an oath to continue fighting against historical revisionism. @inquirerdotnet pic.twitter.com/WgDqoTXkVP

Marcos Jr. formally assumed the presidency at noon Thursday. He is the son of former President Ferdinand Marcos Sr., who placed the entire country under martial law in September 1972 in the wake of bombings that triggered civil unrest in the country and prompted fears of a communist takeover.  He was overthrown via a bloodless revolt in February 1986 amid allegations of plunder, corruption, and human rights violations.

According to Rosales, it is essential “to remind the people of what the truth means – swear the truth, justice, and freedom.” She said they will now have to go down to the community to explain that calls to move on is a sign of ignorance.

“There is so much ignorance. We have to go down and bring out the truth to the community level,” Rosales said in an ambush interview.

She also said too much work awaits Marcos Jr.

“Internationally, there is so much crisis. It is not going to be pleasant, so we have to work. ‘Wag naman natin labanan [we must not fight],” Rosales said, adding that they want to make sure that the poorest community will feel the promised reforms.