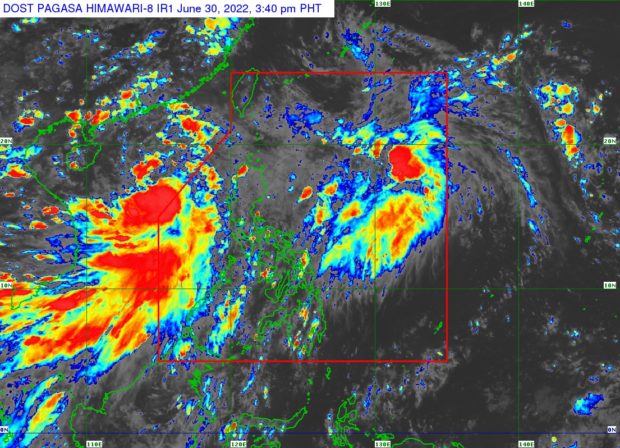 MANILA, Philippines — The low-pressure area (LPA) east of Luzon has strengthened into a tropical depression and is now named “Domeng,” the Philippine Atmospheric Geophysical and Astronomical Administration (Pagasa) said Thursday.

According to Pagasa, the LPA intensified into a tropical depression at 2 p.m.

Pagasa weather specialist Obet Badrina said in a weather report late Thursday afternoon that as of 4 p.m., Domeng was spotted 930 kilometers (km) east of extreme northern Luzon, packing maximum sustained winds of 45 km per hour (kph) and gustiness of up to 55 kph.

Domeng was moving northwestward at 15 kph, he added.

Domeng is forecast to gradually accelerate north-northwestward, remaining far from the country’s landmass before leaving the Philippine Area of Responsibility (PAR) by Saturday, July 2.

(No tropical wind signal or typhoon warning has been raised yet due to Domeng’s location.)

But the tropical depression will further enhance the southwest monsoon, locally known as the “habagat,” which may cause occasionally windy weather conditions and possibly a strong breeze-to-near gale strength over the extreme northern Luzon, northern and western portions of Luzon, and western portion of Visayas.

Cloudy skies with scattered rain showers and thunderstorms may also occur in Metro Manila and the rest of Luzon., according to Badrina.

Nevertheless, no gale warning was raised by Pagasa as of this posting even if Badrina reported moderate to rough sea conditions in the seaboards of Northern Luzon and the western seaboard of Central and Southern Luzon may be expected.

Domeng formed almost immediately after Tropical Depression Caloy (now internationally known as Tropical Storm Chaba) exited the PAR, which still intensifies the southwest monsoon although it is already outside the Philippines, Badrin noted.

The state weather service earlier said the country could expect up to 15 cyclones from July to December.