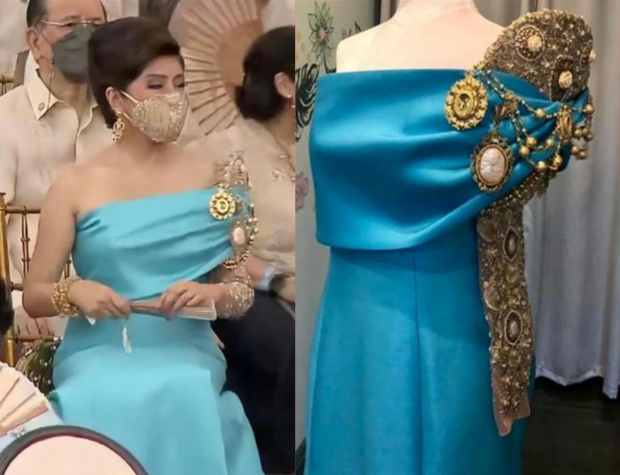 COMBINATION PHOTO: Senator Imee Marcos and her gown at the inaugural of her brother Ferdinand Marcos Jr. to the presidency on Thursday, June 30, 2022, at the National Museum of Fine Arts in Manila. Instagram/@officialimeemarcos

MANILA, Philippines — Senator Imee Marcos wore his father’s gifts during the inauguration of her brother Ferdinand Marcos Jr. to the presidency on Thursday.

During the ceremony, Marcos was dressed in a teal gown that was inlaid with accessories such as lockets, chains, and pendants – gifts she received from her father, former President Ferdinand Marcos Sr., that were restored, according to her.

A post on her official Instagram page claimed that the “sustainable opulent Filipiniana gown” that Marcos was wearing was designed by herself and made by Rem Divino.

Her face mask for the occasion shows off an intricate gold design to match the gold decorations in her gown.

As for Marcos Jr., he donned a rayadillo-inspired barong designed by multi-awarded designer Pepito Albert.

He took his oath as the 17th President of the Philippines at the National Museum of Fine Arts in Manila.