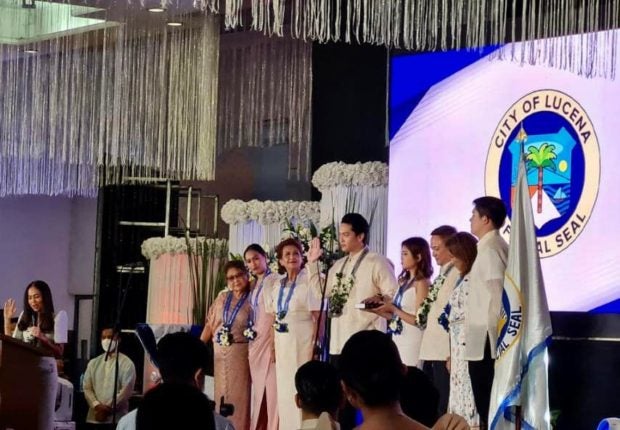 LUCENA CITY—Outgoing Mayor Roderick Alcala turned over on Wednesday, June 29, his position to his son, Mayor-elect Mark Alcala, as he steps down the ladder as vice mayor.

Mark and Roderick and all elected councilors formally took their oaths in a ceremony held in a posh hotel restaurant in this city at noon Wednesday.

The elected City Hall officials made their pledges before Congresswoman and Governor-elect Angelina Tan.

The Alcalas are the first son-and-father team that will lead the local government of Lucena, classified as a highly-urbanized city and capital of Quezon province.

A neophyte politician, Mark, 28, served as executive assistant to his father and “Youth Ambassador” for the city government.

In a past interview, Roderick said his son has his own “dynamic vision” for the progress and development of the city.

Mark vowed that his goal is to provide opportunities “that will create a good life for the people of Lucena.”

The new mayor declared that his focus is the transformation of the city into another business hub with more investors for “Boom Lucena.”

Roderick will return to his former post as vice mayor after serving as the chief executive of Lucena since 2012.

In her speech, Tan expressed her belief that, like Roderick, the new mayor would give his best and shine on his merits for his constituents.