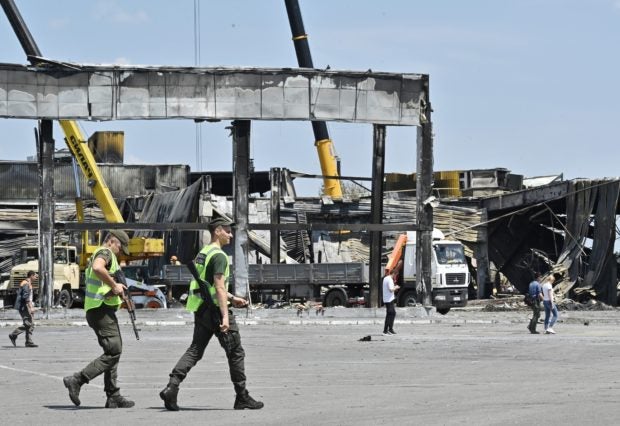 Ukrainian National Guard servicemen and workers walk past the destroyed The Amstor Mall in Kremenchuk, on June 29, 2022, two days after it was hit by a Russian missile strike according to Ukrainian authorities. AFP

Nato leaders meeting in Madrid say Russia now poses a “direct threat” to the Western alliance and agree to bolster its forces, as its chief Jens Stoltenberg says Ukraine can count on support “as long as it takes”.

Russia “is the most significant and direct threat to allies’ security and to peace and stability in the Euro-Atlantic area”, the 30 allies say in a statement.

The leaders, meeting to agree strategy amid Moscow’s war in Ukraine, agree to bolster their forces, promising to deploy extra combat-ready troops on the eastern flank.

Ukrainian Foreign Minister Dmytro Kuleba welcomes Nato’s “clear-eyed stance on Russia, as well as the accession for Finland and Sweden,” on Twitter.

Moscow says Nato is seeking to contain Russia and that Finland and Sweden’s Nato bids will have a “destabilizing” effect on the world.

“The summit in Madrid confirms and consolidates this bloc’s policy of aggressive containment of Russia,” Deputy Foreign Minister Sergei Ryabkov is quoted by Russian news agencies as saying.

“We consider the expansion of the North Atlantic alliance to be a purely destabilizing factor in international affairs,” he adds.

Ukraine says that 144 of its soldiers, 95 of whom are former defenders of the Azovstal steelworks in the southern port city of Mariupol, have been freed in a prisoner swap with Moscow.

“This is the largest exchange since the start of the full-scale Russian invasion,” the main intelligence directorate of Ukraine’s defence ministry says on Telegram.

Ukraine’s President Volodymyr Zelensky tells Indonesia’s President Joko Widodo that he will attend the upcoming G20 summit in Bali depending on who else is attending.

“Certainly I accept the invitation. Ukraine’s participation will depend on the security situation in the country and on the composition of the summit’s participants,” Zelensky says following their talks in Kyiv, in an apparent reference to Russian President Vladimir Putin’s attendance.

Widodo visited Kyiv before heading to Moscow to meet Putin.

Indonesia holds the rotating presidency of the G20 this year and has come under Western pressure to exclude Putin from the gathering after announcing in April he had been invited.

Turkey says it will seek the extradition of 33 alleged Kurdish militants and coup plot suspects from Sweden and Finland under a deal to secure its support for the Nordic countries’ Nato membership bids.

President Recep Tayyip Erdogan dropped weeks of resistance to the membership bids at crunch talks on the eve of the Madrid summit.

At the talks he secured a 10-point agreement under which the two countries vowed to join Turkey’s fight against banned Kurdish militants and to swiftly extradite suspects.

Turkey subsequently announced that it would seek the extradition of 12 suspects from Finland and 21 from Sweden.

Authorities in Crimea announce the launch of bus and train services between the Moscow-annexed peninsula and Russian-occupied parts of southern Ukraine.

“Starting from July 1, regular bus and train services between Crimea and the regions of Kherson and Zaporizhzhia will be launched for the first time in eight years,” Sergei Aksyonov, the pro-Moscow head of Crimea, says.

Russia’s invasion aimed in part at ending Crimea’s isolation by seizing control of large parts of southeast Ukraine to create a land bridge between Russia and the peninsula, which was seized by Moscow in 2014.