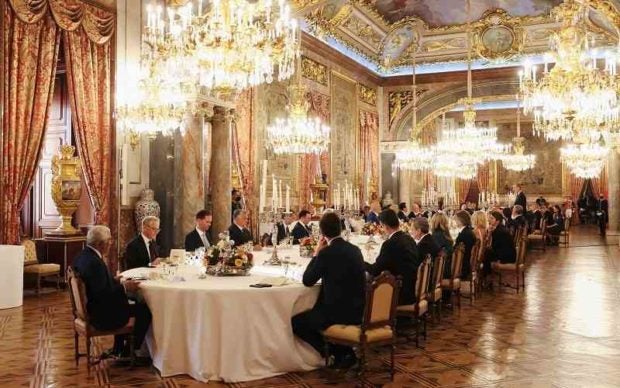 Handout via REUTERS
King Felipe VI of Spain delivers a speech to NATO leaders during a gala dinner at the Royal Palace in Madrid on Tuesday.

The two leaders are in Spain for a North Atlantic Treaty Organization summit meeting.

According to an announcement by the South Korean government, Kishida said the two leaders should “make an effort to develop a healthier relationship between Japan and South Korea” and Yoon responded positively.

The South Korean government said Kishida congratulated Yoon on his presidency and the ruling party’s victory in local elections and Yoon said he hoped for Kishida’s success in the House of Councillors election.

Yoon also said that after the upper house election in Japan, he intended to address outstanding issues in South Korea-Japan relations as soon as possible and to move forward in a future-oriented manner.

According to the South Korean government, Kishida expressed his gratitude to Yoon during their 3-4 minute conversation. “I know that you’re making efforts for the sake of South Korea-Japan relations,” he reportedly said.

The Japanese government said the two leaders exchanged very brief greetings during which Kishida told Yoon he hoped the South Korean president would make efforts to restore the Japan-South Korea relationship, which is in a difficult phase.

The other trade war—Japan vs South Korea