Meet the ‘zombie star’ that survived a supernova blast 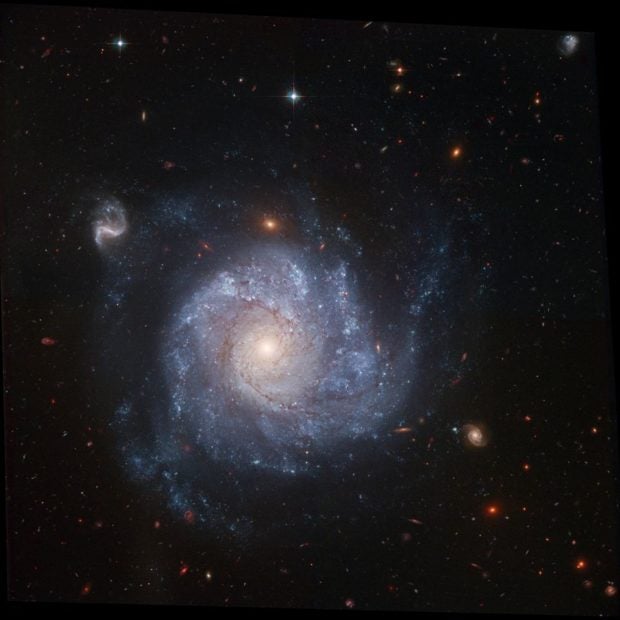 A 2005 image of the spiral galaxy NGC 1309, the location of a star explosion – a supernova – that did not result in stellar death. NASA, ESA, The Hubble Heritage Team (STSCI/AURA), and A. Riess (JHU/STSCI)/Handout via REUTERS

WASHINGTON — Astronomers have observed in a relatively nearby galaxy a star that not only survived what ordinarily should have been certain death – a stellar explosion called a supernova – but emerged from it brighter than before the blast.

The star at issue, observed with the Hubble Space Telescope, is a kind known as a white dwarf, an incredibly dense object with about the mass of the sun crammed into the size of Earth. A white dwarf is the remaining core of a star that blew off a lot of its material at the end of its life cycle, as our sun is expected to do about 5 billion years from now.

This white dwarf is gravitationally locked in orbit with another star – a pairing called a binary system – and with its strong gravitational pull siphoned off and incorporated a good deal of material from this unfortunate companion.

That is where the trouble started. In doing so, the white dwarf reached a mass threshold – about 1.4 times that of the sun – that caused thermonuclear reactions in its core that made it detonate in a supernova, an event that should have killed it.

“We were quite surprised that the star itself had not been destroyed but had actually survived and is brighter than before it exploded,” said Curtis McCully, a senior astrodata scientist at California-based Las Cumbres Observatory, lead author of the research published this month in the Astrophysical Journal.

“During the explosion, radioactive material was produced. This is what powers the brightness of the supernova. Some of this material was left over in the surviving remnant star and acted as fuel to heat the remnant,” McCully added.

This white dwarf resides in a spiral galaxy called NGC 1309, about three quarters the size of our Milky Way. Like the Milky Way, NGC 1309 resembles a spinning pinwheel when viewed from above or below. The white dwarf is located 108 million light years from Earth. A light year is the distance light travels in a year – 5.9 trillion miles (9.5 trillion km).

This image (left) shows the spiral galaxy NGC 1309 before the explosion of a white dwarf star called Supernova 2012Z. Right: Clockwise from top right: the position of the supernova pre-explosion; Supernova 2012Z pictured in 2013; the difference between the pre-explosion images and 2016 observations; the location of the supernova in the latest observations in 2016. ESA/Hubble & NASA, S. Jha, McCully, et al. 2022, ApJ, 925, 138/Handout via REUTERS

There are various types of supernovae depending on the size and composition of the star and the power of the blast.

This star is helping scientists better understand what are called “type Iax” supernovae. In these, a white dwarf experiences runaway nuclear fusion of carbon and oxygen after gaining matter relatively quickly, as this one did by stealing from its companion. But the explosion does not destroy the white dwarf, leaving behind an “undead” remnant.

“We have called these objects ‘zombie stars’ for this very reason. They died but not quite. Early on, many of the simulations of supernovae performed by scientists fizzled out before they were able to blow up the whole white dwarf star. It’s exciting to think that was telling us something about the actual physics of these supernovas,” McCully said.

Scientists to date have detected about 50 of this type of supernova but until now were unable to pinpoint the surviving “zombie star” white dwarf.

Our sun is destined to become a white dwarf, the fate of about 97% of stars.

“At the end of a star’s life – for stars like our sun or a little bigger – the star runs out of fuel in the core and begins to collapse to a white dwarf. During this process, the outer layers of the star are puffed off into a nebula. The leftover core of the star is the white dwarf,” McCully said.

Our sun cannot become a zombie star, however, because it lacks the requisite companion star.

A star may explode in 5 years, will be visible to the naked eye