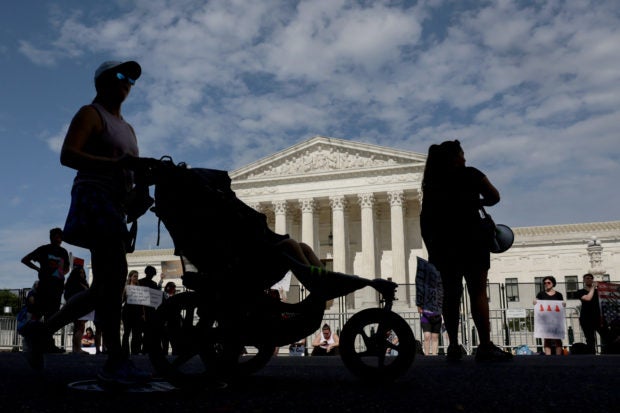 A woman pushes a stroller past a protest by abortion rights activists outside the United States Supreme Court in Washington, U.S., June 27, 2022. REUTERS/Evelyn Hockstein

WASHINGTON — A majority of Americans hold a negative opinion of the U.S. Supreme Court following its decision last week to overturn the Roe v. Wade decision that recognized a right to abortion, says a Reuters/Ipsos survey completed on Tuesday.

The two-day public opinion poll found 57% of Americans had an unfavorable view of the U.S. top court, while 43% viewed it favorably. That puts approval of the court, which is meant to be a nonpartisan entity, on a par with Americans’ views of Congress, which has long been viewed negatively.

It also marks a significant shift from a June 6-7 Reuters/Ipsos poll that showed 48% had an unfavorable view and 52% a favorable view.

Some 27% of respondents had a very unfavorable view of the court, up from 14% who held that view earlier in the month.

The reversal was almost entirely because of increasingly dismal views of the court among Democrats, often more supportive of abortion rights than Republicans are.

Sixty percent of Democrats said they had a less favorable view of the Supreme Court than they had six months ago, compared to 23% of Republicans.

The conservative-dominated Supreme Court on Friday overturned the landmark 1973 Roe v. Wade ruling recognizing women’s constitutional right to abortion. The decision, hailed by conservative activists as a great victory, will dramatically change life for millions of women in America.

In a concurring opinion on Friday, conservative Justice Clarence Thomas, an appointee of Republican President George H.W. Bush, suggested that the same reasoning that led the court to overturn Roe could be used to rethink other rights, such as same-sex marriage and access to birth control.

President Joe Biden, a Democrat, has condemned the ruling. Democratic lawmakers hope the abortion rights setback will help drive Democrats to the polls in the Nov. 8 midterm elections, when Republicans have good odds of winning control of one or both congressional chambers.

Some 55% of Americans believe abortion should be legal in all or most cases, according to a separate Ipsos poll conducted on Monday and Tuesday.

Both polls were conducted online in English throughout the United States. Each gathered responses from 1,005 adults and had a credibility interval – a measure of precision – of four percentage points.

US braces for more protests after Supreme Court abortion ruling