Only half of 1.2 million trike drivers to get fuel subsidy | Inquirer News
Close
menu
search

newsinfo / Headlines
Headlines
MANY DID NOT APPLY, OTHERS DISQUALIFIED

Only half of 1.2 million trike drivers to get fuel subsidy 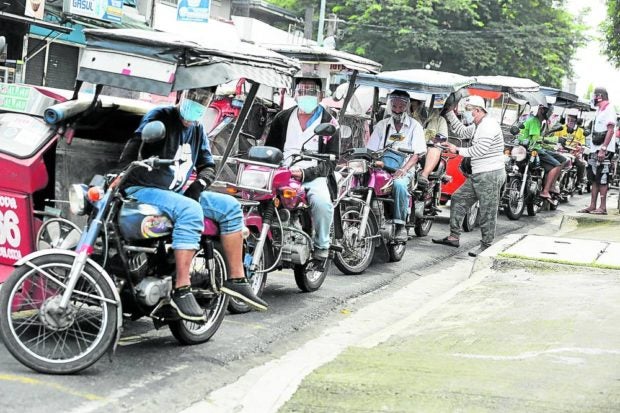 GRIN AND BEAR IT Tens of thousands of tricycle drivers across the country may have to bear and grin it after they were disqualified from receiving the government’s fuel cash subsidy for a number of reasons. (Photo by GRIG C. MONTEGRANDE / Philippine Daily Inquirer)

MANILA, Philippines — Only half of the 1.2 million tricycle drivers nationwide will receive their fuel cash subsidy amounting to P6,500 each, according to the Department of the Interior and Local Government (DILG).

Interior Secretary Eduardo Año said on Tuesday a total of 617,806 tricycle drivers nationwide were qualified to receive the subsidy under the “Pantawid Pasada Program for Tricycle Drivers” to help ease their burden brought by soaring fuel pump prices and the pandemic.

The bad news, however, is that they will have to wait a little longer to get their money.

In a message to reporters on Tuesday, Land Transportation Franchising and Regulatory Board (LTFRB) Executive Director Maria Kristina Cassion said the release of the fuel subsidy for tricycle drivers would be delayed as the agency returned the initial master list of beneficiaries to the DILG due to “errors and corrections.”

She explained the accounts of some beneficiaries were being “rejected” by the system of Land Bank of the Philippines, and they were awaiting the resubmission of the list by the DILG.

According to Cassion, the release of the fuel subsidy was originally scheduled before June 17, but the target date was moved to the first week of July because of this problem.

However, only 766,590 tricycle drivers had their names submitted by local government units (LGUs) for inclusion in the master list, according to Año.

Of these, 148,784 were disqualified due to a lack of means of verification (MOVs), such as driver’s license numbers, incomplete e-wallet information, or late submission of names.

“We had a validation and verification to ensure that only legitimate tricycle drivers with valid franchises and licenses, and not colorum (illegal public transport), would receive the fuel subsidy from the government,” the DILG chief explained.

In April, Año issued DILG Memorandum Circular No. 2022-047, ordering LGUs to produce a validated list of tricycle drivers and franchisees, addresses, e-wallet accounts, and the number of operating tricycles within their respective jurisdictions.

According to Año, the fuel subsidy would be distributed in three batches, the first for the 539,395 drivers with an e-wallet account, the second for the 73,233 drivers who will use the Landbank over-the-counter facility nearest them, and the last for the 5,178 drivers who will get an on-site payout at the LGUs.

Meanwhile, a congressman is urging President-elect Ferdinand Marcos Jr. to consider continuing the Libreng Sakay program until the end of 2022 as it is a “big help” to commuters struggling with rising transport fares.

Camarines Sur Rep. Luis Raymund Villafuerte Jr. made the call ahead of the incoming Chief Executive’s inauguration on Thursday.

On that day, the Libreng Sakay program for public utility vehicles and the Metro Rail Transit Line 3 will end as President Duterte steps down from office.

“I hope that the new administration would be able to find ways of continuing to fund the Libreng Sakay program even at least until the end of the year,” Villafuerte said in a statement on Tuesday.

He added: “With transport costs now eating up a large share of the overall inflation rate in Metro Manila alone, the Libreng Sakay would prove to be a big help in cushioning the impact of the fuel price shock on the commuting public.”

Villafuerte pointed out that drivers of public utility vehicles were already seeking a fare increase from the LTFRB, which would be “even more burdensome” for commuters.

As the implementing agency of the Libreng Sakay program, which required P14 million a day, the LTFRB was given a P7-billion budget.