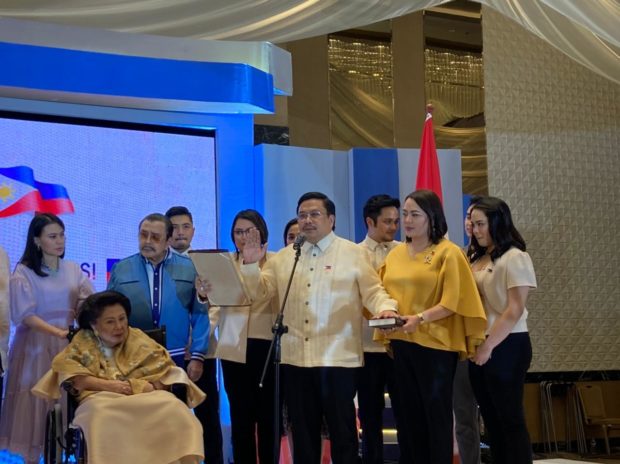 “One part of my journey ended when I was once again voted as senator, but the greater and more challenging part begins today. I say this knowing that this time around, given the problems that our country is facing, the Filipino people need – no, demand — from our leaders a different level and quality of public service,” he said in a speech after his oath-taking.

During the election campaign period, the senator-elect pushed for the betterment of workers’ welfare, such as the wage hike and flexible work arrangements.

He reiterated that he will pursue to fight for Filipino workers’ plight, noting that he “was the voice of the distressed and oppressed” overseas Filipino workers (OFWs) during his tenure as former chair of the Senate committee on labor.

“In terms of issues, I continue to fight for what is closest to my heart – the plight of the Filipino labor force, whether here or abroad,” he said.

“The fight continues, because of the millions of OFWs who continue to fight for basic rights, benefits, and humane treatment abroad. The fight continues because of the challenges that our domestic labor force faces today — insufficient salaries due to the high prices of goods and gasoline, insufficient benefits from employers who are also suffering,” he added, speaking now in a mix of English and Filipino.

Estrada’s half-brother JV Ejercito has also made a Senate comeback as he ranked 10th in the race.