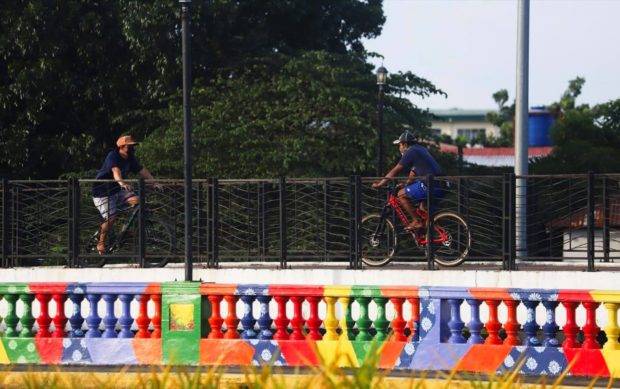 PEDAL POWER | More Ilonggos, just like these two men biking along a major street in Iloilo City on June 2, are getting on bikes amid the continued increase in oil prices. (Photo courtesy of the Iloilo City Public Information Office)

ILOILO CITY, Iloilo, Philippines — A group of volunteers monitoring bicycle use in Iloilo City has noted an upswing in the number of bikers amid the continued increase in prices of oil products.

A bicycle count conducted on June 17 recorded 8,628 in 20 monitoring sites in the city, which was 33 percent more than the 6,493 bicycle users recorded on June 3, according to a Facebook post of Iloilo Bike Ed for Road Safety.

The group of volunteers, along with the city government, Iloilo Folding Bike Riders, the Department of Public Works and Highways in Western Visayas, and Mobility Awards, has been conducting the Friday Bike Count to gather data on bicycle users in the city which will be used in the crafting of policies encouraging mobility, road-sharing, and safety.

The group has not released the results of the last count conducted on June 24.

It noted that the increase in bicycle users was recorded amid a significant increase in prices of oil products.

The new transport route plan has drawn widespread complaints among commuters, many of whom have to take additional public utility vehicle rides.

Iloilo City has earned recognition and awards as a bicycle-friendly city due to its extensive bicycle lanes and continuous programs promoting bicycle use.

The city won the gold award of the Bike Lane Awards 2021, which recognizes “exemplary efforts” of local government units “that have pushed for active transportation through the establishment of new infrastructure and the implementation of various support programs in the last two years.”

It was also named the country’s most bicycle-friendly city during the Mobility Awards 2021.

The city has an existing and being developed bike lane network totaling around 32 kilometers, including an 11-km bicycle lane network along the Sen. Benigno Aquino Jr. Avenue (formerly Iloilo Diversion Road) and along the Iloilo River Esplanade.

Bike festivals are also being regularly held in the city attracting thousands of bike enthusiasts.

Pedaling into the new normal: Bicycles take a slow, but expanding road in PH