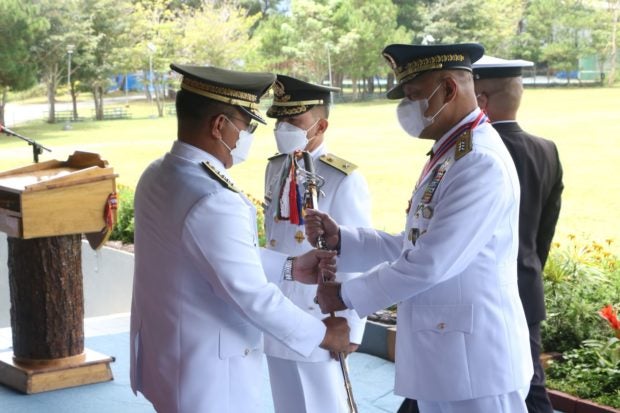 Cartujano, a member of PMA “Maringal” Class of 1988, retired on Sunday when he turned 56 years old.

Tomines, a 1992 graduate of the United States Military Academy in West Point, New York, credited his predecessor for ensuring that everyone at the PMA was vaccinated given that the coronavirus pandemic still rages for the third year. The academy imposed a lockdown in February 2020 to spare its cadets from COVID-19 infection, which was lifted in March this year.

Vaccines were also made available for convicts who are about to be freed for good behavior. Called “insular prisoners,” these persons deprived of liberty are loaned out to the PMA to serve as handymen and gardeners.

Tomines, who will still serve concurrently as commandant of cadets, will take charge of new cadets who will compose PMA Class of 2026 when they enter Fort Del Pilar here next month. They would be the third set of cadets to be accepted in the academy during the pandemic.

Centino, also a member of the Maringal Class, lauded Cartujano for spearheading measures to stop hazing in the academy.

He said Cartujano’s initiatives have been “highlighting PMA’s genuine commitment to eliminate hazing in the Cadet Corps in order to preserve PMA’s image as the bastion of learning and character development.”

Before the pandemic, PMA was enveloped in controversy due to the Sept. 18, 2019, hazing death of Cadet Fourth Class Darwin Dormitorio, for which several senior cadets were charged for murder.

Addressing the cadets for the first time since he was appointed chief of staff, Centino described them as “the most fortunate young Filipinos who are being accorded [a] three-to-four year education and guaranteed employment after graduation.”