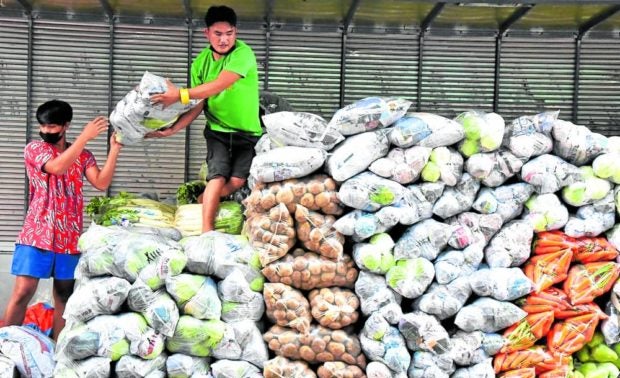 PACKED AND READY Workers at La Trinidad Vegetable Trading post in La Trinidad, Benguet, prepare bags of potatoes, radish, cabbage and carrots for shipment to buyers, many of them will sell these fresh produce in markets in Metro Manila and other provinces. —EV ESPIRITU

MANILA, Philippines — Agri-fishery products worth an estimated P667.5 million were “technically smuggled” into the country from 2019 to 2022, according to a Senate panel report.

These were among the findings of the Senate Committee of the Whole under Committee Report No. 649, which was filed on June 1, 2022, and uploaded on the Senate website on Monday.

“The amount of technically smuggled agri-fishery commodities for the years 2019 to 2022 is estimated at P667.5 Million,” read the report, which was signed by 17 senators.

The Senate committee, led by Senate President Vicente Sotto III, investigated the smuggling of agricultural products into the country. The first hearing was conducted in December 2021.

In its submission to the Senate committee, the Department of Agriculture Task Group on Food Security said that from 2019 to 2020, the Compliance and Regulatory Enforcement for Security and Trade Office (CREST-O) “reported misdeclared meat products” in two container vans with an estimated value of P10 million.

This year, CREST-O and STG-EI reported misdeclared fresh or chilled vegetables as well as agri-fishery commodities, including poultry, pork, meat, and fishery products, in 23 container vans with an estimated worth of P109 million.

In its committee report, the Senate committee attributed the continued smuggling of agricultural products to the “failure of fully digitalizing inspection processes.”

“The implementation of the National Single Window System to eliminate human intervention for a more transparent inspection process was planned by the BOC in 2015. However, the BOC raised that it could not be implemented at this time because of technical and legal matters,” the report read.

“However, the BOC reported that PNSW2 [or] the Single Window 2 is currently being implemented under the new project known as the TradeNet Platform by the Department of Finance. Out of 72 agencies that are supposed to be on-boarded, 22 are already on-boarded and the remaining 51 will be at the end of 2022,” it added.