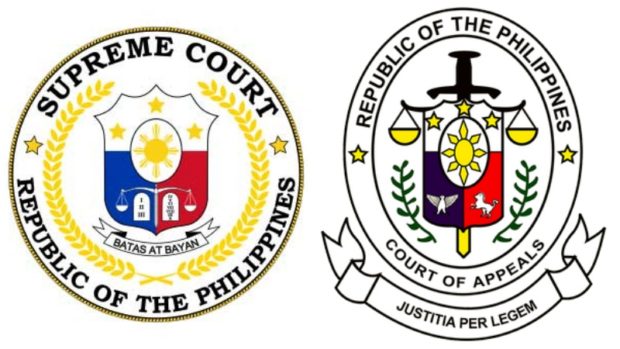 A combination photo of Supreme Court and Court of Appeals logos. INQUIRER.net

MANILA, Philippines — The Supreme Court and Court of Appeals (Manila station) have declared work suspension on June 29 and 30 as re-routings and road blockings would be implemented for the inauguration of incoming President Ferdinand “Bongbong” Marcos.

Chief Justice Alexander Gesmundo issued the memorandum following the Metro Manila Development Authority (MMDA) advisory about road closures and traffic rerouting plans to be implemented as part of the security measures for the June 30 event.

Meanwhile, the Court of Appeals, through Presiding Justice Remedios Salazar-Fernando, issued a separate Office Order suspending work from June 29 and 30 following a consultation with the Chief Justice.

The inauguration of the President-elect is set for June 30 at the National Museum of Fine Arts in Manila as outgoing President Rodrigo Duterte’s term of office ends by noon on the same date.

Supreme Court and the Court of Appeals (Manila station) declare work suspension on June 29-30, 2022 due to road closures and rerouting for the inauguration of incoming President Ferdinand "Bongbong" Marcos at the National Museum on June 30. @inquirerdotnet pic.twitter.com/dGvvASVOM9

Cities next to Manila asked to declare June 30 holiday