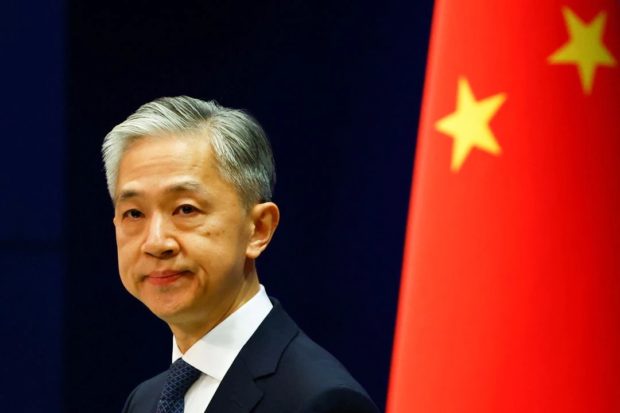 MANILA, Philippines — China is ready to revive negotiations on joint oil exploration with “the new Philippine government,” as it maintained that this was still the “right way” for both countries to manage their maritime differences in the West Philippine Sea.

“China stands ready to work in concert with the new Philippine government to advance negotiations on joint development and strive to take early substantive steps so as to deliver tangible benefits to both countries and peoples,” Chinese Foreign Ministry spokesperson Wang Wenbin said in a press briefing in Beijing on Friday.

“Leaders of the two countries reached [an] important common understanding on this. The two governments signed the Memorandum of Understanding (MOU) on Cooperation on Oil and Gas Development and have actively pursued negotiations and made important progress within this framework,” he added, referring to the MOU following Chinese President Xi Jinping’s state visit in 2018.

“The president had spoken. I carried out his instructions to the letter: oil and gas discussions are terminated completely. Nothing is pending; everything is over,” Locsin said in a speech during the 124th anniversary of the Department of Foreign Affairs.

“Three years on and we have not achieved our objective of developing oil and gas resources so critical for the Philippines—but not at the price of sovereignty; not even a particle of it,” said the country’s top diplomat.

He said it remains with the next administration to protect the country’s sovereignty “all the way to the wire.”

“Surrender of any portion of Philippine sovereignty is not an option. Not for love; not for money,” Locsin said.

Sen. Aquilino Pimentel III said the government should never have pursued such talks “which are clearly unconstitutional from our point of view.”

The 1987 Constitution allows the government to enter into such joint ventures provided they are at least 60 percent owned by Filipinos.

The Constitution states: “The President may enter into agreements with foreign-owned corporations involving either technical or financial assistance for large-scale exploration, development, and utilization of minerals, petroleum, and other mineral oils according to the general terms and conditions provided by law, based on real contributions to the economic growth and general welfare of the country.”

President Rodrigo Duterte said any exploration deal with China will have a 60-40 arrangement in favor of the Philippines.

Sought for comment, Jay Batongbacal, director of the University of the Philippines Institute for Maritime Affairs and the Law of the Sea, said China’s apparent overtures to revive the negotiations were “their way of downplaying the failure of the talks.”

“They have been fortifying and strengthening their structures and operations in the West Philippine Sea regardless of the negotiations for joint exploration and development,” he told the Inquirer.

Batongbacal criticized China’s “insistence on provisions that would have the Philippines waive its exclusive sovereign rights over its resources and implicitly recognize that China has some kind of legal right or entitlement to the WPS (West Philippine Sea) despite the [arbitral ruling].”

But Albay lawmaker Joey Salceda said: “I still think that it is in our best interest to find a live-and-let-live solution with China on utilizing WPS resources.”

“Instead, I strongly suggest to [President-elect Ferdinand Marcos] that we renegotiate a way to approximate an inventory of WPS energy assets independently, with international observation and audit. That way, we know the kind of resources we are negotiating about without undermining our sovereignty,” the lawmaker also said in his statement on Sunday.

China claims nearly the entire South China Sea, including parts of the West Philippine Sea within the exclusive economic zone of the Philippines.

But the Permanent Court of Arbitration in the Hague, where Manila brought its arbitral case against Beijing in 2013, invalidated China’s claim three years later. China refused to recognize that ruling.

A year after the MOU following Xi’s visit, President Duterte claimed that Xi had offered the country a controlling stake in a proposed joint energy venture in the West Philippine Sea if it would set aside the Hague ruling.

In 2020, Duterte lifted the moratorium on energy projects in the West Philippine Sea that was in effect since 2014, before his administration.

But in April this year, the Department of Energy ordered the suspension of oil exploration activities, particularly concerning Service Contracts 72 and 75—two sites off Palawan province that the government identified as possible areas for a venture partnership with Beijing.

As a result, PXP Energy Corp. and its subsidiary Forum Energy Ltd. — which had been hired by the government to conduct exploration activities — had to declare a force majeure, saying the order prevented them from “performing their obligations.”

Joint WPS oil exploration with China under review, not yet final – Palace

Malacanang told to be cautious, transparent in oil, gas deal with China