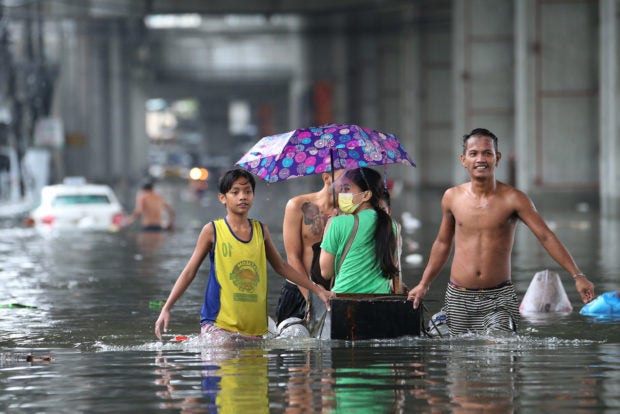 MANILA, Philippines — If nations fail to curb global warming, 7.4 million people in the world’s largest cities, including Quezon City, will be exposed to severe flooding and drought in the next three decades, based on the findings of a new study that seeks to quantify the impacts of climate change.

The “Water Safe Cities” report drawn up by C40 Cities, the Institute for Environmental Studies, and Climate Adaptation Services also said that people in the Global South (developing countries) were 10 times more likely to be exposed to river and coastal flooding.

“Flooding is a complex threat that cities are navigating. Cities will have to protect their critical infrastructure from the damage stormwater flooding can wreak,” it said.

The report is part of a global research effort to forecast the effects of climate change as countries across the world race to limit global warming to 1.5 degrees Celsius and head off potential catastrophes.

Quezon City is part of the research as it is a member of the global C40 network of megacities committed to addressing climate change.

Among others, the study found that more frequent and severe droughts will increase water losses in C40 cities by 26 percent and cost $111 billion worth of damage per year over the next three decades.

By 2050, these cities will experience combined riverine flood volumes of 10.5 million per cubic meter annually — equivalent to four and a half times the volume of Egypt’s Great Pyramid of Giza — causing catastrophic economic, health and social consequences worldwide.

“The effects of the climate crisis don’t impact citizens equally — we know that it’s the most vulnerable — particularly those in the Global South—that face the worst consequences of climate change,” Khan said.

“Poverty, deprivation and health inequalities will also reduce people’s ability to prepare for, respond to, and recover from flooding incidents,” he added.

Under the current climate, nearly 87,000 people (2.93 percent) of Quezon City’s residents are exposed to flooding each year. If the situation holds, this will increase by 37 percent or nearly 120,000 people by 2050.

Apart from flooding, severe droughts also pose a grave threat to C40 cities as they can worsen water and food scarcity.

The report estimated that these cities would face surface water losses of more than 16.1 billion cu. m a year by 2050, or equivalent to the Sydney Harbor in Australia drying up 30 times over.

Quezon City was listed as among the cities facing a medium risk of surface water losses.

But while the report painted a dire picture, it also underscored that urgent, sustainable action could help cities “adapt to the climate emergency and work toward a climate-safe future for their residents.”

At the same time, the report recommended the implementation of coastal nature-based solutions, like planting more mangroves, or building artificial barriers (like seawalls and floodgates) against flooding.

To address droughts, it pushed for water conservation and water-system efficiency improvements to reduce supply risks.

“Cities have a wealth of tools and knowledge at their disposal to ensure that they are adequately preparing for the realities of the climate crisis, but effective action starts with an understanding of the scope and scale of the challenge,” said Mark Watts, executive director of C40 Cities.