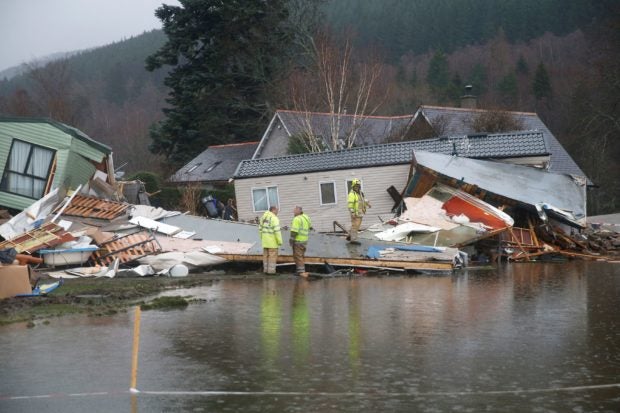 Members of the fire service look at caravans that were swept away at Ballater caravan park after the river Dee burst its banks in Aberdeenshire, Scotland, Britain January 4, 2016. (REUTERS)

In some parts of Europe, such losses could climb. A new study in the journal Nature found that stormy seas around Scotland and northern England have unleashed an increasing number of extreme storm surges in recent decades.

“Floods affect nearly a third of the world population, more than any other peril,” said Martin Bertogg, head of catastrophe perils at Swiss Re, in a statement. In 2021, there were more than 50 severe flood events across the world, often triggered by extreme rainfall and coastal storm surges.

Scientists long thought that more severe flooding along low-lying coastlines was driven only by the world’s rising sea levels, caused by climate change melting polar ice and warming ocean waters so they expand.

But scientists found that, in northern areas of the United Kingdom, stronger and more frequent storms over the North Atlantic since 1960 led to more extreme storm surges, according to the Nature study https://www.nature.com/articles/s41586-022-04426-5 released Wednesday. The increased storm activity was as much to blame for the increase in extreme storm flooding as was sea level rise.

Around mainland Europe, however, calmer weather canceled out the storm surge impacts of sea level rise between 1960 and 2018.

“Most countries assume that the likelihood of surge extremes will remain the same and only account for sea level rise,” said lead author Francisco Calafat at the National Oceanography Centre in the United Kingdom. This may cause governments to underestimate future flooding, he said.

If European countries do not adapt to increasing flood risks, they could face up to nearly 1 trillion euros ($1.1 trillion) in yearly damages by 2100, according to a 2018 study in the journal Nature Climate Change. The United Kingdom would be hardest hit, experiencing about a fifth of those damages.