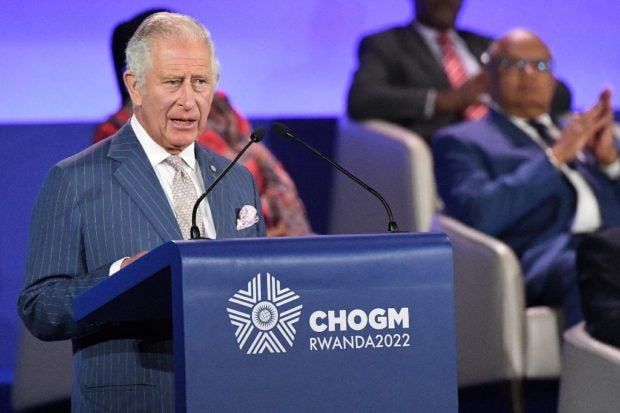 Britain’s Prince Charles, Prince of Wales, speaks on June 24, 2022,during the opening ceremony of the Commonwealth Heads of Government Meeting at Kigali Convention Centre in Rwanda. AFP

KIGALI — Prince Charles told Commonwealth leaders Friday that the choice to become a republic or abandon the queen as head of state was “a matter for each member country to decide”.

Speaking at the opening of a Commonwealth summit in Rwanda, the British heir to the throne said the 54-member club of mainly former British colonies would always be “a free association of independent, self-governing nations”.

The Prince of Wales is representing Queen Elizabeth II as the head of the Commonwealth in Rwanda at a time of renewed discussion over its purpose and profile in a modern world.

Republican movements are taking root in a number of Commonwealth nations and some are seeking reparations for colonial-era injustices like slavery.

Charles acknowledged the change underfoot and said the Commonwealth was a diverse and evolving family.

“The Commonwealth contains within it countries that have had constitutional relationships with my family, some that continue to do so, and increasingly those that have had none,” Charles told an audience of presidents and prime ministers.

“I want to say clearly, as I have said before, that each member’s constitutional arrangement, as republic or monarchy, is purely a matter for each member country to decide.

“The benefit of long life brings me the experience that arrangements such as these can change, calmly and without rancour.”

Queen Elizabeth has championed the Commonwealth since she took the throne in 1952, but in the decades since some member states have cast off the monarch as head of state.

Republican movements in some of the 14 Commonwealth countries outside the UK where the queen is head of state are gathering pace.

Another member, Australia, has also appointed a minister for the republic, in a sign of constitutional change on the horizon.

There have also been questions about the future role of the royal family at the helm of a group representing one-third of humanity in rich and poor countries across the globe.

At its last meeting in 2018, the Commonwealth designated Charles the queen’s successor as head of the organization and delegates in Rwanda praised the royal family for its dedication to the cause.

The Commonwealth has come under scrutiny over its relevance but supporters say the expansion of membership from nations with no historic ties to Britain underscores its health.

The two newest members are Mozambique and host Rwanda, and west African states Togo and Gabon are expected to join the club at this summit.

Harry, Meghan do their last royal job at Commonwealth event

Read Next
Metro Manila logged most number of new COVID-19 cases — OCTA Research
EDITORS' PICK
Do all the things you do, faster
Motorcycles, smartphones, and cash prizes up for grabs in TNT’s ‘Tuloy Ang Saya’ Raffle in Mindanao
House energy committee chair Arroyo bats for cheap electricity
NCR at increased COVID risk again
New PS-DBM director says DepEd laptop MOA ‘not legal’
House okays budget; ways to go in Senate
MOST READ
Robredo’s tarpaulin portrait at Palace just a ‘placeholder’
Shopee PH gets flak for getting Toni Gonzaga
Robredo supporter tackles elephant in room: No massive fraud in 2022 polls, surveys were just right
DepEd: We are in a crisis situation in education sector
Don't miss out on the latest news and information.