Guarding Sara: Why next VP is getting own security team | Inquirer News
Close
menu
search

Guarding Sara: Why next VP is getting own security team 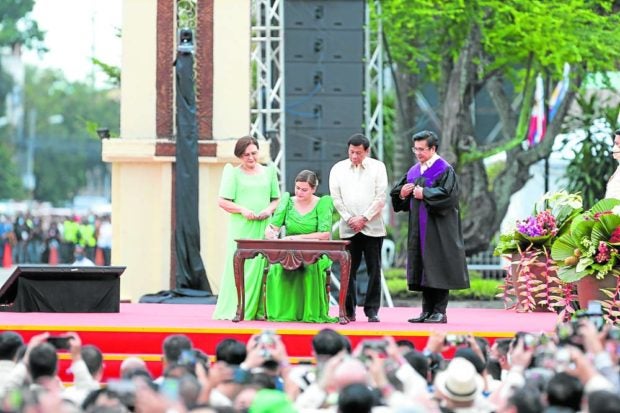 HER OWN TIME AND PLACE | Vice President-elect Sara Duterte, daughter of outgoing President Duterte, signs her inaugural document after being sworn into office on June 19, as her parents look on before their hometown crowd in Davao City. The outgoing city mayor chose to hold the ceremony 11 days ahead of the oathtaking of President-elect Ferdinand Marcos Jr. (File photo by JEOFFREY MAITEM / Inquirer Mindanao)

MANILA, Philippines — The Armed Forces of the Philippines has “activated” a new unit tasked with ensuring the security of Vice President-elect Sara Duterte and her family.

A day after the launching of the Vice Presidential Security and Protection Group (VPSPG) on Friday, Duterte herself issued a statement acknowledging that a “request” has been made for the formation of that group, in anticipation of “future elections” and the possibility of “strained relations” under that scenario between the president and vice president.

Duterte thanked the AFP and the Department of National Defense “for the positive response and action to the request that a security unit separate from the Presidential Security Group (PSG) be created and be assigned to the Office of the Vice President.”

“This AFP initiative also highlights the importance of having an independent group that will provide all Philippine vice presidents with the necessary security and protection,” she added.

“The activation of the VPSPG is commendable as it will resolve the matter of continuity in security for all vice presidents of the Philippines,” Duterte also said.

The activated VPSPG was “highly laudable,” she said further, because “foresight was demonstrated” — such that “it may be expected to solve the challenges if, in future elections, the vice president and the president face the misfortune of having strained relations.”

The VPSPG was deemed “activated” in a ceremony led by AFP Chief of Staff Gen. Andres Centino at Camp Aguinaldo, the AFP headquarters.

Centino appointed Lt. Col. Rene Giroy of the Philippine Army as the first group commander of the VPSPG. 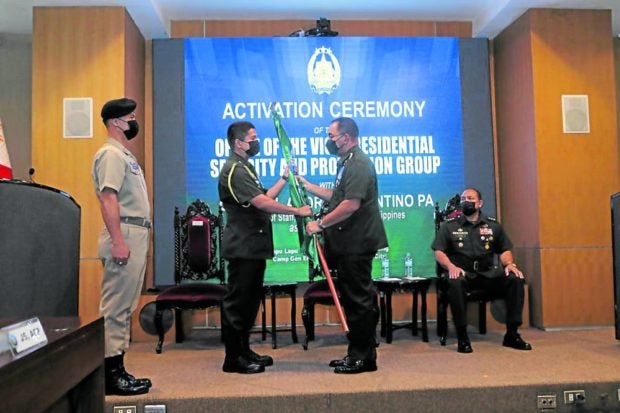 “The AFP saw it fitting to provide the Office of the Vice President a dedicated unit that shall ensure the safety and security of the second-highest elected official in the country,” the military chief said.

“I am confident that the newly designated acting VPSPG commander and the rest of the officers and enlisted personnel entrusted to ensure the safety, security and welfare of the vice president and her family shall perform their responsibilities to the best of their abilities,” he added.

According to its website, the PSG, a unit of the AFP, is mandated to provide protection and escort for the president, vice president and their immediate families, as well as honor guard duties for visiting dignitaries.

Despite the PSG’s mandate, the AFP also had a group called the Vice Presidential Security Detachment (VPSD).

The AFP said the newly created VPSPG now serves as the vice president’s security detail and is separate from the PSG.

In an interview with the Inquirer, a military official who requested anonymity for lack of authority to speak on the matter said “VPSPG has the same security package as the VPSD but made into a unit. It is created to be more responsive to the needs of the [Office of the Vice President].”

According to that source, the VPSD had around 200 personnel, including aides-de-camp.

But with the “upgrade” to the security detail for the vice president, the VPSPG will now have around 300 personnel, the source said.