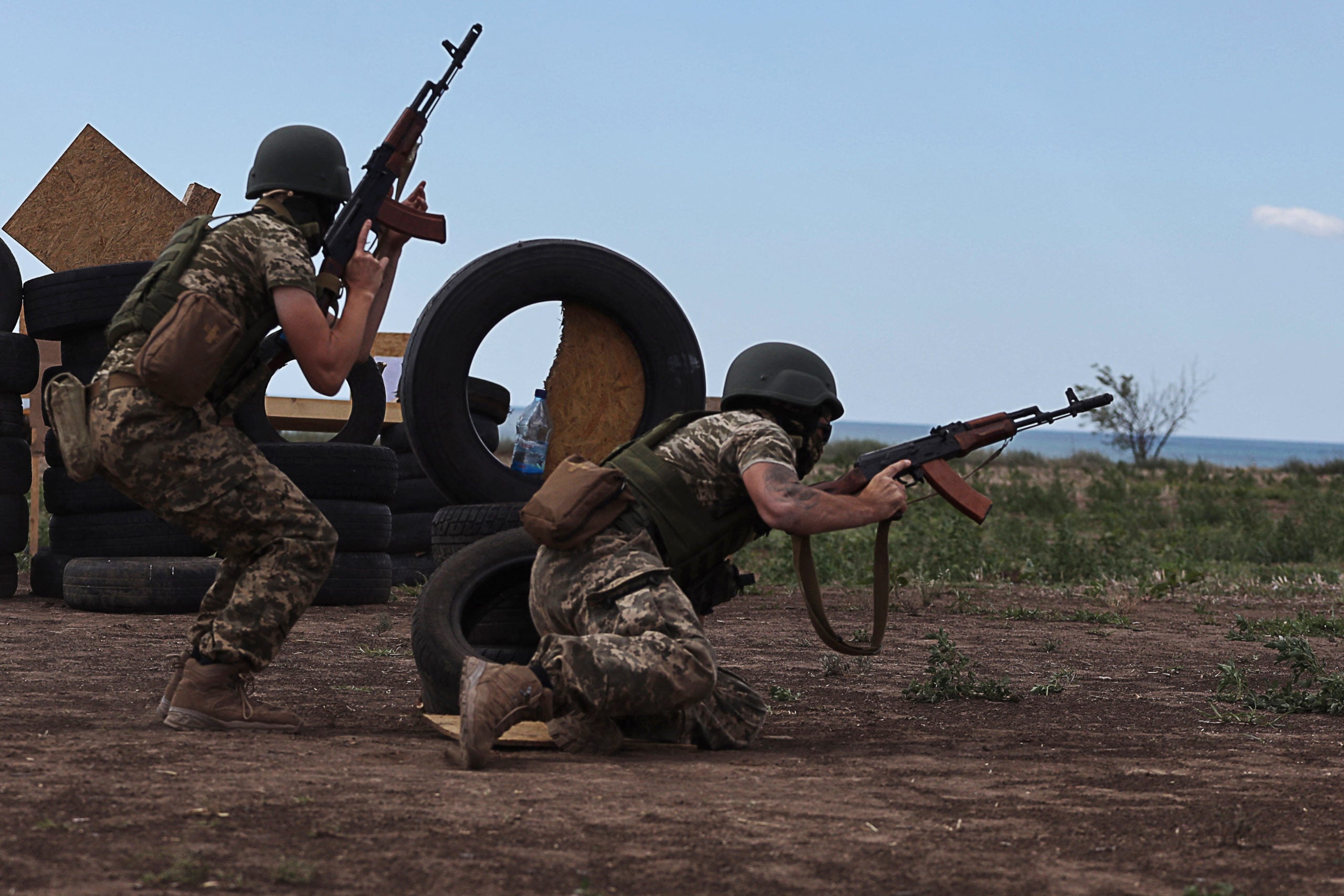 Servicemen of the 126th Separate Territorial Brigade of the Armed Forces of Ukraine take part in military exercises in Odessa region on June 22, 2022, amid Russia’s military invasion launched on Ukraine. (Photo by Oleksandr GIMANOV / AFP)

KYIV, Ukraine — Ukraine on Saturday said Russia was aiming to drag its ally Belarus into the war, after reporting that missiles which struck a border region near Kyiv came from Belarusian territory.

Twenty rockets fired from Belarusian territory and the air targeted the village of Desna in the northern Chernigiv region at around 05:00 am (0200 GMT) on Saturday, Ukraine’s northern military command wrote in a statement on Facebook.

Ukraine’s intelligence service said six Russian bombers fired 12 cruise missiles from the town of Petrykaw in southern Belarus after taking off from a Russian airbase.

It added that Russian forces hit targets in the northern Kyiv and Sumy regions.

The Ukrainian intelligence service said on Telegram that the action was “directly linked to Kremlin efforts to pull Belarus as a co-belligerent into the war in Ukraine”.

The “massive bombardment” struck infrastructure but had not caused any casualties, the Ukrainian army added.

Desna, a small village with a pre-war population of around 7,500 people, lies 70 kilometres (43 miles) to the north of Kyiv and a similar distance to the south of Ukraine’s border with Belarus.

Belarus has provided logistical support to Russia’s invasion of Ukraine that began on February 24, especially in the first weeks of the offensive, although it officially remains a non-belligerent at this stage.

The country, ruled by Lukashenko with an iron fist since 1994, has also been targeted by Western sanctions aimed at Russia over its assault on Ukraine.

Lukashenko, 67, has accused the West of being “at war with Russia” and elevating “Nazism to the rank of state ideology” over its military and financial support for Ukraine.

He has also demanded that Belarus be included in any talks and a deal to end the conflict.

Belarus had previously been hit by Western sanctions after the authorities carried out a heavy-handed repression of widespread protests following a 2020 election that the opposition said Lukashenko had stolen.

Putin’s steadfast support for Lukashenko helped the man dubbed “Europe’s last dictator” to overcome the challenge to his leadership.

Opposition leaders who fled Belarus in the wake of the crackdown, including Svetlana Tikhanovskaya, have sought refuge in Western countries.

Sprinter Krystsina Tsimanouskaya, who sought the protection of staff at last year’s Tokyo Olympics after saying she feared being forcibly returned to Belarus, received refuge in neighbouring Poland.

The forced diversion of a Lithuania-bound plane to Belarus to arrest opposition activist Roman Protasevich and his Russian girlfriend Sofia Sapega in 2021 further soured relations between Minsk and the West.