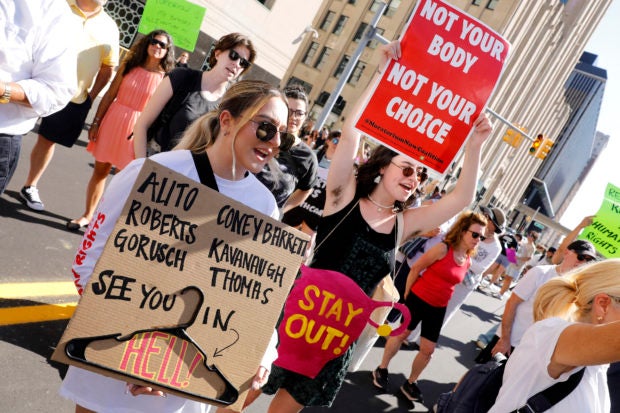 Abortion rights activists protest outside the US Federal Courthouse after the US Supreme Court overturned Roe Vs. Wade, in Detroit, Michigan on June 24, 2022. ( AFP)

LOS ANGELES – Sports stars across the United States reacted with shock and anger on Friday after the Supreme Court’s decision to scrap the right to abortion after nearly five decades.

WNBA players and teams led a chorus of outrage over the seismic decision which threatens to result in abortion becoming illegal in nearly half of the 50 US states.

The WNBA noted that the conservative-leaning Supreme Court’s abortion decision had come just a day after another bombshell ruling that decreed Americans have a right to carry a handgun in public.

“Are we in a democracy where guns have more rights than women?” the WNBA statement asked.

“This decision shows a branch of government that is out of touch with the country and any sense of human dignity.”

The league said the decision would create a “treacherous pathway” to abortion bans that “reinforce economic, social and political inequalities.”

Many WNBA players and teams took to social media to register disgust at the decision.

Bird’s club, the Seattle Storm, meanwhile declared themselves “furious and ready to fight.”

Los Angeles Sparks star Lexie Brown added: “How did we get here? So much happening in this country and this is what they want to focus on. It’s really terrifying actually.”

‘Cruelty is the point’

US women’s soccer icon Megan Rapinoe, her voice cracking with emotion, spoke of her sadness in comments to reporters ahead of an international friendly against Colombia this weekend.

“It’s hard to put into words how sad a day this is,” Rapinoe said. “I just can’t understate how sad and how cruel this is.

“The cruelty is the point, because this is not pro-life, by any means.

“It will completely exacerbate so many of the existing inequalities that we have in our country. The right to freedom and the pursuit of happiness and liberty is being assaulted in this instance.”

Rapinoe, who is gay, said she also feared that US constitutional protections on same-sex marriage would eventually be in jeopardy.

“We live in a country that forever tries to chip away what you have innately, what you have been privileged enough to feel your entire life,” Rapinoe said.

US tennis legend Billie Jean King, who wrote in her memoir “All In” of her harrowing experience seeking an abortion in the days before it became a right in the United States, said Friday’s ruling “will not end abortion.”

“What it will end is safe and legal access to this vital medical procedure,” King wrote on Twitter. “It is a sad day for the United States.”

King’s fellow tennis great Martina Navratilova said simply: “The March to Gilead is here”, in a reference to the novel and television drama “The Handmaid’s Tale”, which portrays a dystopian future where women are subjugated and enslaved by men.

Several male sports stars also spoke out against the decision.

“Impose a constitutional right to concealed carry of firearms, and following day end the fundamental constitutional protection of reproductive rights!? Our country is actively moving in the wrong direction,” Frei wrote on Twitter.