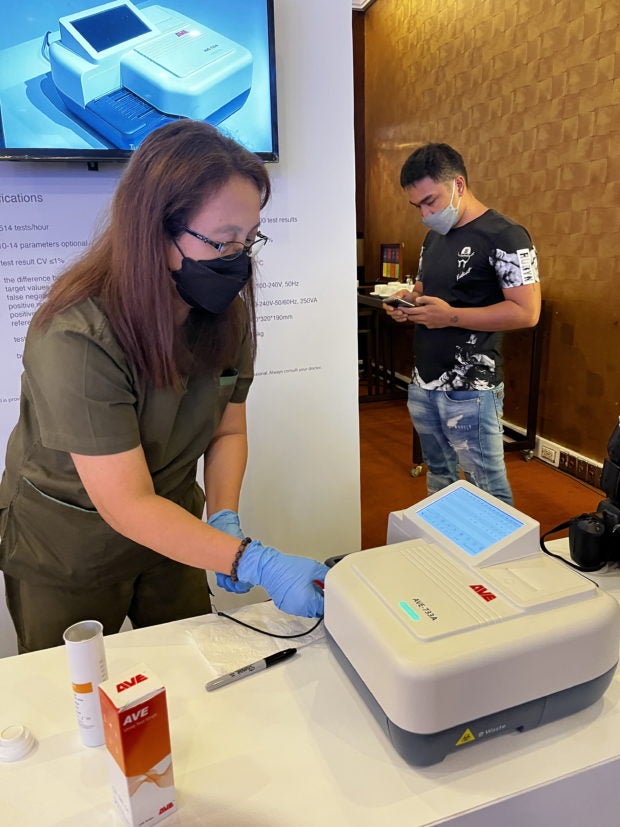 FIRST IN PH With the urine-albumin-to-creatinine-ratio (uACR) machine, presented here at a press conference in Mandaluyong City on Friday, kidney patients may now easily get tested by their primary care physicians or through their local governments, according to proponents.  CONTRIBUTED PHOTO

In 2010, Reynaldo Abacan Jr. went to the doctor to have his kidneys checked for the first time—and he had to go straight to his dialysis treatment 24 hours later.

The checkup showed that he had stage 5 chronic kidney disease (CKD), which meant that his kidneys were severely damaged.

“When I was diagnosed, I was at stage 5 and it was already too late. The problem with CKD is that when [symptoms] develop, it is only then that you know your illness is already severe and you need to go through dialysis,” Abacan said on Friday at the launch of the urine-albumin-to-creatinine-ratio (uACR) machine, a device used in measuring kidney damage.

His family supported him throughout his 12-year treatment, said Abacan, who is now the president of Dialysis PH Support Group Inc., an organization of about 53,000 members with CKD.

To this day he still has to undergo dialysis three times a week, but his experience with the renal disease continues to inspire him to actively raise awareness about CKD and the importance of early detection through yearly testing.

“One of our group’s advocacies is for people to have themselves checked at least once a year,” Abacan said. “Once your kidneys are damaged, time is your enemy.” One Filipino develops CKD every 40 minutes, equivalent to 36 Filipinos getting the renal disease in a single day, per the latest data from the National Kidney and Transplant Institute.Filipinos with CKD numbered more than 7 million in 2021.

Those with such preexisting illnesses as diabetes, high blood pressure and heart disease are highly at risk for CKD. But lifestyle also comes into play: smokers and those who consume large amounts of salty and high-cholesterol food are prone to be afflicted.

According to nephrologist Dr. Elizabeth Roasa, also a professor at the Faculty of Medicine and Surgery at the University of Santo Tomas, most patients have no idea that they have CKD because of the general lack of awareness about the disease and the lack of symptoms in its early stages.

Citing a study in the United States, Roasa said more than half of patients, or 59.3 percent, were found to have been undiagnosed from 2006 to 2017.

She said another factor contributing to the lack of awareness was the “underutilization of uACR,” a urine test that detects the presence of albumin, a kind of protein that is an early indicator of kidney disease. A first of its kind in the country, the uACR machine was unveiled by pharmaceutical company AstraZeneca Philippines and medical supplies provider MedAsia at a hotel in Mandaluyong City.

“Protein in the urine is not bad … There are certain proteins that are beneficial in terms of kidney function, but albumin is the harmful protein,” Dr. Nickson Austria, head nephrologist at Calamba Medical Center, said at the press conference.

The presence of albumin in the urine means that one’s kidneys “are working overtime,” Austria said.

Roasa described the uACR test as a much better testing procedure for CKD detection because it “is more sensitive” than urinalysis.

“Ordinary urinalysis will not detect lower levels of albumin because of dipstick limitations. That’s why we advocate [the use of] uACR,” she said. Dr. Cyril Tolosa, AstraZeneca associate director for medical affairs, said that with the availability of uACR machines, patients may now easily get tested by their primary care physicians and even through their local governments.

“We’re doing a lot of campaigning at the community level. What’s important is that patients are aware that they need to seek consultation with the doctor, and the doctor will now advise patients to have themselves tested,” Tolosa said.

In 2021, nearly 20,000 Filipinos died of diseases of the genitourinary system which include renal failure and disorders of the kidney and ureter, according to preliminary data from the Philippine Statistics Authority.

A CKD-afflicted person’s kidneys cannot properly filter blood. This can result in excess fluid and waste from blood remaining in the body, which may lead to other health problems, such as heart disease and stroke.A blood test showing the estimated glomerular filtration rate (eGFR), or the amount of blood the kidneys filter in one minute, will determine the extent of damage in the kidneys or the stages of CKD.

—With a report from Inquirer Research INQSources: psa.gov.ph, cdc.gov, nhs.uk