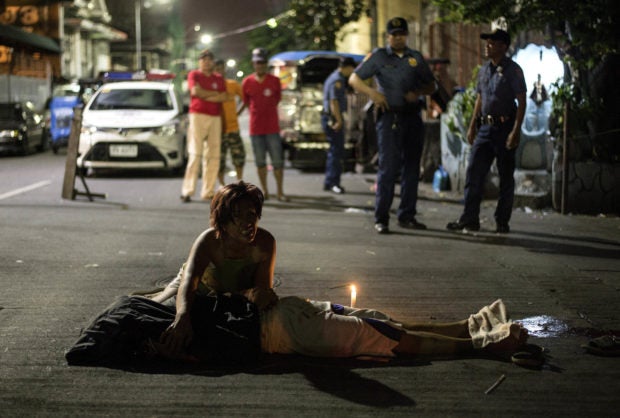 FILE PHOTO: Nanette Castillo grieves over the dead body of her son Aldrin, an alleged drug user killed by unidentified assailants in Manila in this October 2017 photo. AFP

MANILA, Philippines — The Office of the Prosecutor of the International Criminal Court (ICC) has formally requested the resumption of investigations regarding the rights situation in the Philippines, seven months after it was suspended upon the request of the government.

In a 53-page document posted on ICC’s website on Friday night (Manila time), Prosecutor Karim Khan asked the Pre-Trial Chamber to resume the investigation that centers on President Rodrigo Duterte’s war on drugs, which has been the subject of criticisms for supposedly violating human rights.

Duterte and other administration officials responsible for the drug war are facing the crime against humanity of murder complaints filed by several groups in the country, including relatives of drug war victims.

According to the ICC prosecutors, they have analyzed the manner of investigations done by the Philippine government — a consideration as to why the ICC probe was suspended in November — and concluded that necessary steps were not taken.

“The Prosecution has carefully analysed the information submitted in support of the Deferral Request, and concluded that the GovPH has not demonstrated that it has investigated or is investigating its nationals or others within its jurisdiction within the meaning of article 18(2),” the Office of the Prosecutor said in the request.

“The investigation carried out by the GovPH [as defined by the national proceedings to which they refer] does not sufficiently mirror the investigation to be conducted by the Prosecution,” it added.

Khan’s request also claimed that the Philippine government also did not touch allegations of extrajudicial killings before July 2016 — or before Duterte took office.

“Notably, the GovPH makes no reference at all to any investigation into crimes committed before July 2016, nor to any investigation into crimes other than murder—and, even then, only murders allegedly carried out in police operations, as opposed to murders allegedly carried out in other relevant circumstances,” the Office noted.

Khan’s request comes a year after Bensouda sought judicial authority for a full investigation of the rights situation in the country, reasoning that based on information gathered by her office, there is reason to believe that state actors have killed thousands of civilians under the war against illegal drugs

Duterte and his officials have maintained that they are no longer under the jurisdiction of the ICC, having withdrawn from the Rome Statute since 2018.  However, Bensouda and other legal experts say that the ICC still has jurisdiction over the cases that happened before the withdrawal.

On several occasions, Duterte has criticized the ICC, saying that they are ‘fools’ as they did not prepare well for their cases.

Last September 2021, the ICC pre-trial chamber authorized the start of the investigation on the drug war.  It was however stopped after ICC granted the Philippine government’s request, based on the reasoning that the justice system in the country is fully functional.