‘We felt like deadly virus’: Aquino sister Ballsy thanks ‘genuine friends’ who stayed

MANILA, Philippines — On the first death anniversary of late President Benigno “Noynoy” Aquino III, his sister thanked “genuine friends” for staying by their side, recalling how their family felt “like we were a deadly virus, worse than COVID.”

During the Holy Mass to commemorate the former president’s first death anniversary on Friday, Ballsy Aquino-Cruz said that while their family had lots of highs, they also experienced an equal number of lows.

She said that it was in the lows that they learned that those who stayed by their side “are your genuine friends.”

“Our highs would be comparable to yours, but our lows were extraordinary. There were times when we felt like we were a deadly virus, worse than COVID. Our mother bore the brunt of that and later, Noynoy did,” Aquino-Cruz said.

“We learned the hard way that anyone can show up and celebrate with you when you’re up there. But the ones who stay by your side when things are not going your way, they are your genuine friends,” she added. 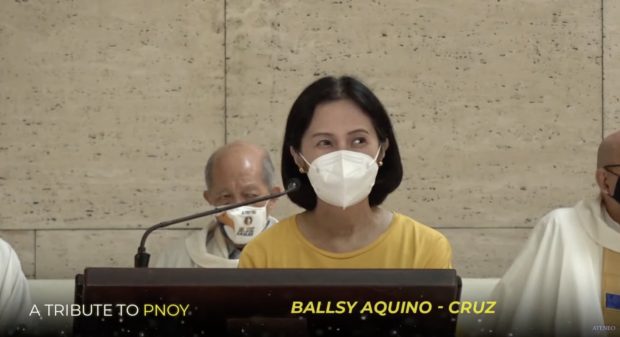 Aquino-Cruz thanked those who attended the Holy Mass, recalling how former President Aquino was known to refer to the public as his “bosses.”

(Those of you who Noynoy served once and are here today to commemorate his death anniversary, you are the real friends.)

(The word to describe our joy at being with you hasn’t been invented yet.)

Aquino-Cruz likewise recalled how their “hearts fell apart” when her brother passed away in 2021.

“A year ago, our hearts fell apart when Noynoy breathed his last. But we returned him to our Creator with gratitude for the blessing that he was—a simple, honest, self-effacing, and decent Filipino who gave his all without fanfare when he was tasked to serve his bosses,” Aquino-Cruz further said.

Ex-President Noynoy Aquino's sister, Ballsy Aquino-Cruz: Our family's story has been compared to a roller coaster many times. We have had lots of highs and probably an equal number of lows. pic.twitter.com/2fsprDVMee

The late president, popularly known as PNoy, died peacefully in his sleep on June 24 last year. His death certificate showed that the cause of his death was renal disease secondary to diabetes.

The family matriarch, Cory, is also a former president who passed away in 2009 due to complications of her colon cancer. A year later, Aquino won the national elections.