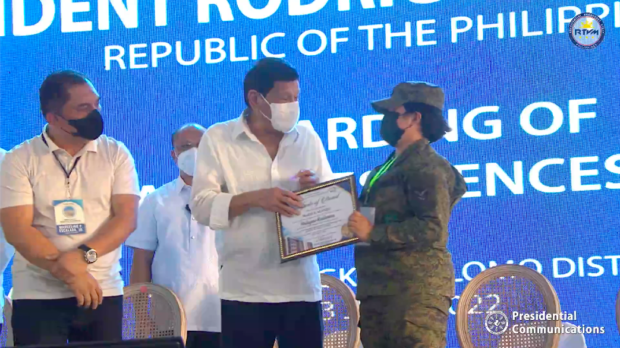 According to the National Housing Authority (NHA), the Madayaw Residences is one of the government’s housing projects.

“I really tried my best to give this. Even though it’s impossible for us to provide a house for everyone, at least there are beneficiaries from all sectors of society,” Duterte said in Bisaya during the awarding ceremony.

The President pushed the NHA to boost its mandate of providing housing to the public even as the agency transitions under a new leader. Duterte’s term ends on June 30, as his successor, Ferdinand “Bongbong” Marcos Jr., takes the helm after.

“As the agency transitions under a new leadership in a few days, I urge the NHA to intensify its mandate of addressing the housing needs of our countrymen, especially the homeless, marginalized, and low-income families,” said Duterte.

“I am confident that your steadfast efforts in the succeeding administration will redound to a more active, participative and productive society,” he added.