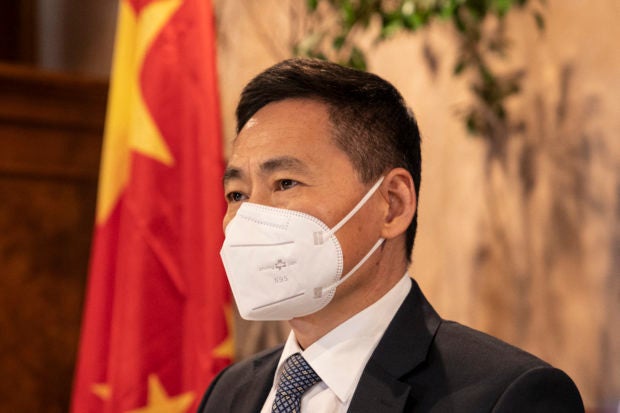 Xue Bing, China Special Envoy to the Horn of Africa loks on during the first Horn of Africa peace conference in Addis Ababa, Ethiopia, on June 20, 2022. AFP

ADDIS ABABA — China wants to play a “more important role” in promoting peace and security in the Horn of Africa, Beijing’s special envoy said Tuesday, but confirmed that the eight-nation conference had not discussed the region’s conflicts.

The two-day China-Horn of Africa Conference on Security, Governance and Development in Ethiopia’s capital Addis Ababa, the first of its kind, ended Tuesday.

It signals the superpower’s push to gain influence in a region beset by conflict and security issues.

But Xue Bing, Beijing’s first special envoy to the region, told reporters: “We did not discuss a specific conflict (or) dispute.”

The conference was aimed at exploring how China could play a more important role in the region, he said, “not only in trade and investments but also in area of peace and development.

“This is the first time for China to play a role in the area of security,” he added.

Xue had said earlier that Beijing was willing to act as a mediator to resolve regional disputes.

On Tuesday however, he acknowledged that conference discussions “did not touch upon the mediation efforts and nobody raised this issue”.

And while his responsibilities included mediating all kinds of conflicts, it was on one condition, he said: “Parties concerned have to agree to that.”

The conference was attended by representatives from Djibouti, Kenya, Somalia, South Sudan, Sudan and Uganda as well as Ethiopia and China — but not Eritrea.

Xue said Eritrea’s government — an isolated regime accused by some of destabilising the region — was “very supportive of this conference” but was unable to participate in it “for some technical reason”.

Xue was appointed to his role in February, shortly after a visit to Eritrea, Kenya and the Comoros by Chinese Foreign Minister Wang Yi.

China has a military base in Djibouti, its only one in Africa, as well as a port aimed at securing its vast economic interests in the region.

Ethiopia itself has been wracked by fighting in the north between government forces and the Tigray People’s Liberation Front (TPLF) since November 2020.

The conflict has killed untold numbers of people and triggered a humanitarian crisis affecting millions.

Prime Minister Abiy Ahmed suggested last week that he was open to negotiations with the TPLF, following a truce in March.

The rebels themselves have spoken of possible talks in the Kenyan capital Nairobi.