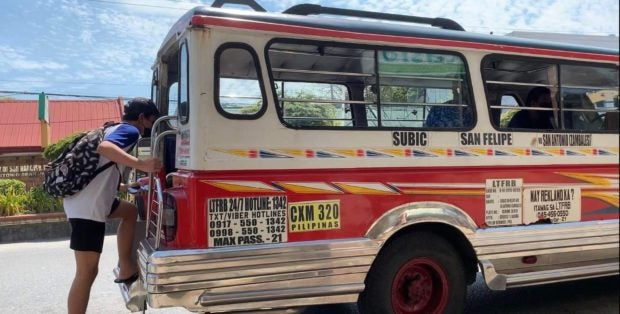 SAN ANTONIO, Zambales — A majority of the public utility jeepney (PUJ) drivers belonging to a transport cooperative in Zambales will temporarily stop their operations due to the rising oil prices, an official of the group said Tuesday, June 21.

Joelson Del Mundo, chairman of Subic-San Felipe-San Narciso Transport Cooperative, told the Inquirer that after the phase 3 of the service contracting program of the Land Transportation Franchising and Regulatory Board (LTFRB) on June 30, at least 30 of the 42 public utility jeepney (PUJ) drivers of their group will stop plying their routes.

PUJ drivers in the province were tapped for the government’s service contracting program and paid P28 per kilometer.

The program provides incentives to the drivers based on the number of trips they make per week, regardless of the number of passengers they take in.

“After Phase 3 of the program, drivers can no longer afford the daily boundary because their daily income will only go to fuel expenses,” said Del Mundo. The “boundary system” refers to the fixed amount for driving a passenger vehicle for 12 hours.

Del Mundo, who is also a jeepney operator and driver, used to earn P1,500 daily, but because of high fuel prices, he now only earns P200 to P500.

“How about those who don’t own the jeep and need to pay for their boundary? There is nothing left for them to take home,” he said.

The surging fuel prices are also taking a toll on local taxi drivers.

But Orlando Dabu, taxi driver and board director of Olongapo, Zambales, Bataan Transport Federation, said despite incurring losses, they would still continue to serve the commuters. INQ

Jeepney driver forced to have a second job, set for a third