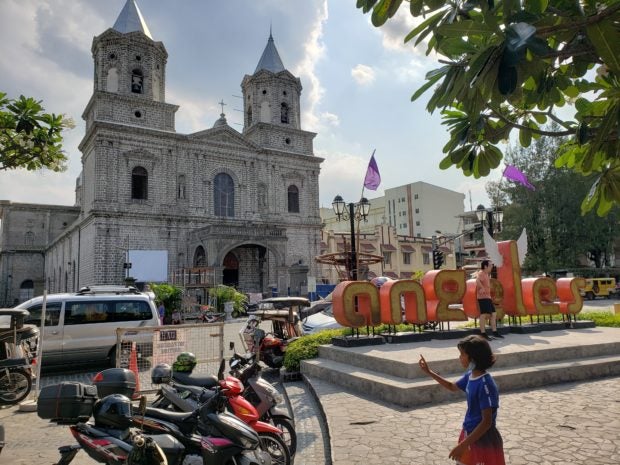 “The big church,” as locals call the Holy Rosary Parish Church, is the most popular landmark in Angeles City. | PHOTO: Jun A. Malig

ANGELES CITY—All passenger vehicles plying to and from the nearby localities of this city will be barred from the main road to ease traffic conditions starting July.

The measure is in accordance with City Ordinance No. 609, series 2021, the city government announced on Sunday, June 19.

The ordinance says public vehicles from San Fernando may use only SM City Telabastagan to drop off passengers.

Those from Mabalacat City can pick-up and drop passengers at the Bayanihan Park or SM City Clark terminal in Balibago.

Public passenger vehicles from Magalang town can travel only up to the transport terminal of Marque Mall in Pulung Maragul village, and those coming from Porac town will continue to use the drop-off point near the Sandra Mall in Sto. Rosario village.

There are 23 routes to this city from different parts of Pampanga and Tarlac provinces.

Some residents of other localities, who study and work in this city, have criticized the city ordinance.

Riding in two passenger vehicles to her workplace takes a toll on her meager salary. She said riding a tricycle to reach her workplace before 8 a.m. “is too expensive.”

Others call for a number coding system for private vehicles entering this city.

“Public transport are not the ones causing the traffic in Angeles, but the private vehicles because there are too many of them,” a commuter said.