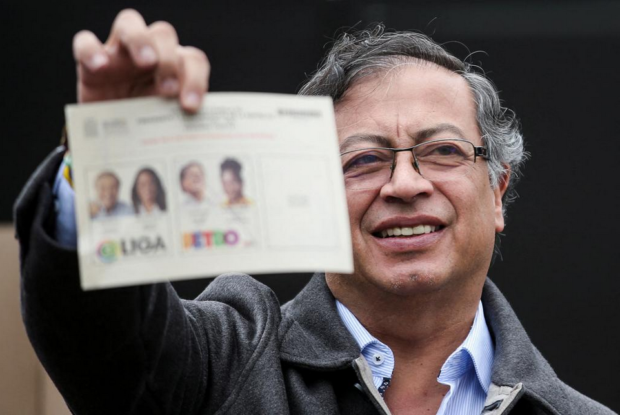 Colombia’s Gustavo Petro of the Historic Pact coalition shows his ballot before casting his vote at a polling station during the second round of the presidential election in Bogota, Colombia June 19, 2022. REUTERS FILE PHOTO

BOGOTA — Colombian leftist guerrilla group the National Liberation Army (ELN) is open to advancing peace talks with the incoming government of President-elect Gustavo Petro, it said on Monday, and called for reforms to tackle social exclusion and inequality.

Leftist Petro and his vice president-elect, Francia Marquez, won 50.4% of the vote in Sunday’s election.

“The ELN remains active in its fight and political and military resistance, but also its disposition to advance in a peace process to further talks which started in Quito in February 2017,” the ELN said in a statement.

Petro, who takes office on Aug. 7, has pledged to fully implement the 2016 peace deal with the former Revolutionary Armed Forces of Colombia (FARC) guerrilla group and to seek talks with the still-active ELN rebels.

The incoming president, a former member of the M-19 guerrilla group, has called for a rapid negotiation with the ELN, and has also suggested applying the 2016 peace deal with the demobilized FARC to those combatants who reject the agreement and formed dissident groups.

If Petro promotes changes to overcome political violence and develops plans for employment and entrepreneurship, agrarian reform, and continuity of the peace process, among others, he will have popular support, the ELN said. The group called for expanding economic inclusion for Colombia’s marginalized communities.

Peace talks between previous governments and the ELN — which is accused of financing itself with kidnapping, extortion, drug trafficking and illegal mining — did not advance due to the group’s radical positions, a diffuse chain of command and dissent in its ranks.

The ELN, which has some 2,400 fighters, began peace talks with the previous government of former President Juan Manuel Santos, but negotiations fell apart after a car bombing in Bogota, while current President Ivan Duque demanded that the group release all its hostages.

The ELN, founded by radical Roman Catholic priests in 1964, is widely considered to be less centrally controlled than FARC was.