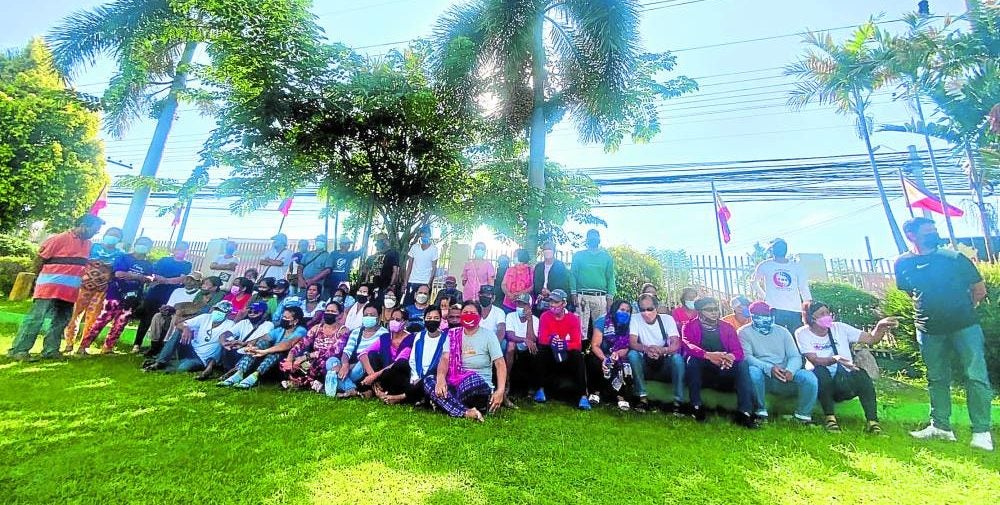 COURT APPEARANCE The 83 farmers, land reform advocates and their supporters gather outside a court in Capas, Tarlac, on Friday before their arraignment for the illegal assembly and malicious mischief charges filed by a cooperative for allegedly destroying a portion a 200-hectare sugarcane plantation in Barangay Tinang, Concepcion town. —PHOTO COURTESY OF BAGONG ALYANSANG MAKABAYAN

TARLAC CITY—Police in Tarlac province have filed three new complaints against the 83 farmers and peasant advocates who were accused of having illegally occupied a portion of a 200-hectare disputed farmland in the village of Tinang in Concepcion town.

The farmers and their supporters faced additional charges for disobedience, obstruction of justice and usurpation of real rights before the Tarlac Provincial Prosecutor Office filed on Friday, on top of the two charges now lodged at the Municipal Circuit Trial Court (MCTC) in Capas town, said lawyer Jo Clemente, cocounsel of the respondents, collectively called the “Tinang 83.”

The subpoenas for the three complaints were served against the Tinang 83 at the Capas MCTC on Friday during their arraignment for the illegal assembly and malicious mischief charges that were filed against them by the Tinang Samahang Nayon Multipurpose Cooperative Inc. (Tinang SNMCI), which also claimed farming right over the disputed sugarcane plantation.

An “overwhelming majority” of the 83 respondents refused to make a plea during the arraignment, according to lawyer Erickson dela Cruz, cocounsel for Tinang 83. This prompted MCTC Judge Antonio Pangan to enter a “not guilty plea” for the respondents.

Dela Cruz told reporters that the farmers and their supporters asserted they were “harassed” by the police when they were apprehended in Hacienda Tinang while doing a “bungkalan” (cooperative planting), an allegation the police denied.

Clemente said they would file before the court a motion to quash all the charges against Tinang 83,

The Department of Agrarian Reform (DAR) must also resolve the ownership issue over the disputed farmland, she added.

“We’re always hopeful that our actions will yield positive results. We have strong faith and will win this soon,” said Clemente in an interview.

Hacienda Tinang is locked in a dispute between the cooperative and the farmers, who both hold certificates of land ownership award (Cloas) issued by the DAR.

The farmers, who are agrarian reform beneficiaries (ARBs) belonging to the Malayang Kilusang Samahang Magsasaka ng Tinang, claimed that its 236 members are all certified ARBs, making them the real owners of the former friar land.

The group cited the collective Cloa given to them by the DAR in September 1995. But a year later, the ARBs discovered that the DAR had also issued a collective Cloa to the Tinang SNMCI following a reevaluation based on the appeal of the cooperative, resulting in the ownership feud.

DAR documents showed that Capas Mayor-elect Noel Villanueva and a relative are major shareholders of the cooperative.

During Friday’s arraignment, supporters of the Tinang 83 staged a protest outside the court, asking that all charges against the respondents be dropped.

“We appeal to the judge to dismiss the charges and consider the sorry plight of the farmers and their supporters,” said Antonio Flores, spokesperson for the farmers’ group Tanggol Magsasaka.

The Commission on Human Rights has also started its own investigation into the mass arrest and the detention of the respondents, who were released on bail on June 12.

“It was a nightmare,” said sectoral advocate and community journalist Patrick Terrence Repelente, one of those arrested and detained.

Repelente said they were conducting a “peaceful” cultivation when the policemen arrived and arrested them without a warrant. —WITH A REPORT FROM ARAM LASCANO, CONTRIBUTOR