MANILA, Philippines — At least one-third of Filipinos felt that their lives took a turn for the worse after a year, polling firm Social Weather Stations (SWS) said in a recent survey released Thursday.

According to the SWS, 34 percent of the survey respondents from April 19 to 27 said that their quality of life was worse today than 12 months before the survey. On the other hand, 32 percent said their lives improved while it stayed the same for the remaining 34 percent.

The percentage of people who felt their lives had gone worse and those who thought that their lives improved yielded a net gainer score of -2, which SWS categorized as a “fair” score. 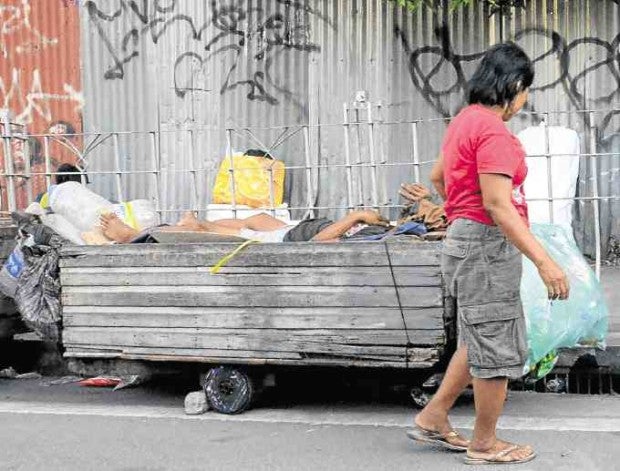 People sleeping in carts, like this family in Manila, are familiar sights in many highly urbanized areas of the country, which continues to reel from a high poverty incidence. FILE PHOTO / ARNOLD ALMACEN

SWS said that compared to the December 2021 edition of the same survey, this is already an improvement as the net gainer score back then was -16, classified as ‘mediocre’.Still, it is below the pre-COVID-19 pandemic score of +18.

SWS further noted that the surveys have yielded a positive net gainer score since 2016, before scores deteriorated due to the health crisis that started in March 2020.

While improvements have been recorded as the economy reopened, SWS said it has not yet reached the positive range.

“The survey question on the respondents’ assessment of their change in quality-of-life in the past 12 months has been fielded 144 times since April 1983,” the survey explained.

“The Net Gainer score was generally negative until 2015 when it rose to positive numbers until the drastic deterioration beginning with the COVID-19 pandemic lockdowns. It has since trended back upwards but still has not reached the positive range,” it added.

Generally, net gainer scores increased across all locales but the highest increase was recorded in Visayas, with a 19-point jump from a -31 score in December 2021 to -12 in April 2022.

Metro Manila and Balance Luzon are the only locales with a positive net gainer score for the April 2022 survey.

SWS also found a correlation between hunger and people who say their lives got worse — or losers — as it is more prevalent among the said respondents. Similarly, those who think their lives improved or the gainers had lesser incidents of hunger.

“The April 2022 survey found that 12.2% of Filipino families, or an estimated 3.1 million, experienced involuntary hunger – being hungry and not having anything to eat – at least once in the past three months,” SWS said.

“Hunger is significantly greater among Losers than among Gainers […] Compared to December 2021, Hunger rose from 13.6% among Losers, and 11.1% among Unchanged. However, it fell from 9.9% among Gainers,” it added.

SWS’ survey was conducted through face-to-face interviews of 1,440 adults segregated into 360 each for the locales of Balance Luzon, Metro Manila, the Visayas, and Mindanao.

The polling firm maintained sampling error margins of ±2.6% for national percentages and ±5.2% for Balance Luzon, Metro Manila, Visayas, and Mindanao.

40% of Filipinos say their quality of life worsened — SWS survey